One of the most common questions I receive from prospective clients is: “What does the 3D CGI animation production process entail?” 3D CGI animation has become so widespread these days that people sometimes think it is a quick and simple process. They often have no idea about what it really takes to produce a professional quality 3D CGI animation.

The entire 3D CGI animation production process can include up to 25 or more individual steps depending on the size and scope of the 3D animation project being considered. A simple one shot 10-20 second 3D product animation clip may only include a few of these steps. But a more substantial animation of a minute or more may include all these steps and more, including multiple rounds of proofs, reviews, changes and approvals. Sometimes the steps may be rearranged to suit specific projects as well.

The process is generally broken down into three distinct phases: Pre-production, Production and Post-production. Each of those stages is comprised of a number of distinct steps. Each one of these steps requires special talent, software and equipment. On very small projects some of these steps may be eliminated or combined. On very large projects that may need substantial development work each phase may be broken out as a separate project if necessary.

The process can take anywhere from a few days for a very short simple clip to a few months for a more substantial 3D animation project. One of the greatest determining factors for the overall timeline is often client input. The number of proofs, reviews, changes and revisions necessary as well as any delays waiting for client reviews or approvals often determines the overall timeline more than the raw production time. 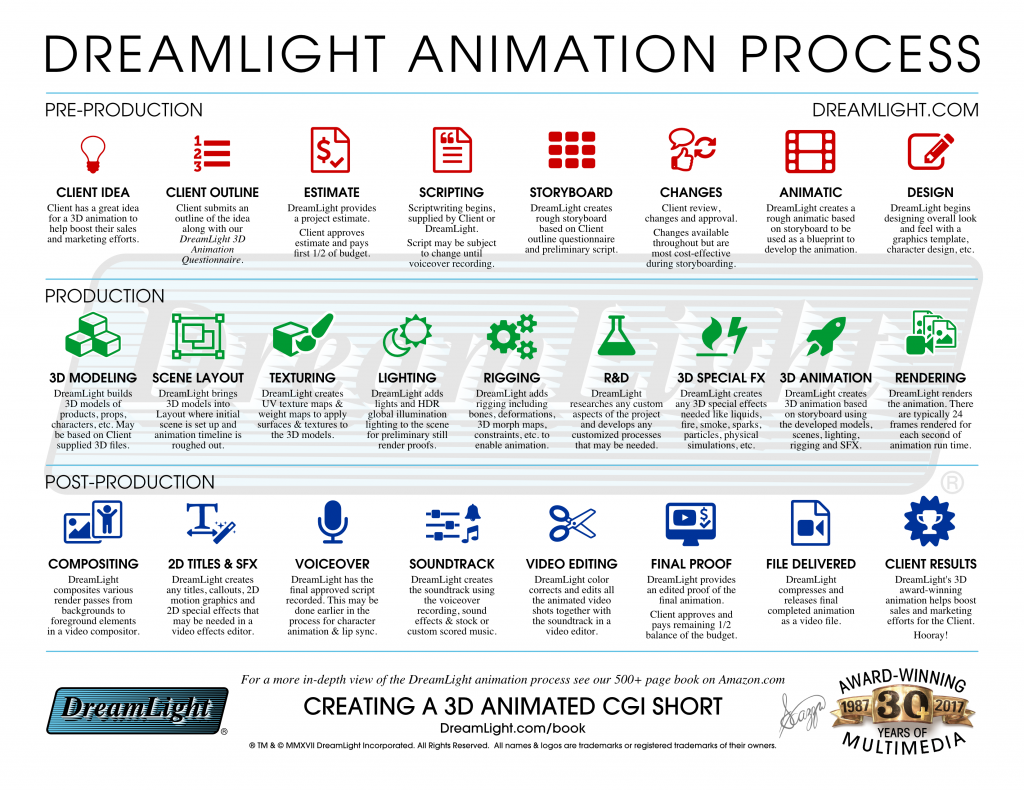 This graphic is included in our DreamLight Client Proposals. It may be downloaded and printed for future reference. Simply right-click on the DreamLight Animation Process link or image above and select “Save Link As…”

If you found this brief breakdown of the 3D CGI animation production process interesting you’ll love my book: Creating a 3D Animated CGI Short, The Making of The Autiton Archives, Fault Effect – Pilot Webisode. This book is over 500 pages chock full of detailed examples and insights from the production of my 3D animated CGI short film – Fault Effect. It includes examples of every step of the production process; from initial concept through character design, set design, 3D modeling, texturing, lighting, camera animation, 3D character animation, lip sync, 3D rendering, post-production, compositing, and all the way to film festival submissions and online web distribution.