This is a quick how to tutorial – adding Mac OS X small icons to answer dialogs LiveCode hack fix. One of the coolest things about LiveCode is that it’s built with LiveCode itself. The entire IDE is built from LiveCode stacks. This means the entire thing is easily editable and hackable. So if something doesn’t work right or doesn’t work the way you like, you can change it yourself.

[Disclaimer: This post is intended as an educational example. Before editing or hacking LiveCode itself, be sure to backup LiveCode and all your data files first, in case you mess things up. Proceed at your own risk. DreamLight and Michael Scaramozzino make no warranties whatsoever.]

On Mac OS X, dialogs typically have a small version of the application icon overlaid on the dialog box icon to help identify which app the dialog belongs to.

The documented way to add small app icons to your answer and ask dialogs in LiveCode is to first add 64×64 and 32×32 pixel PNG versions of your app icon to the stack. They don’t need to be visible so you can add them to a card that never shows. I typically create an extra card named “Resources” and include any images and icons that the stack may need on that hidden card. Then you set the icons on the Standalone Application Settings in the Mac OS X section in the items under “Icons to display on ask and answer dialogs.” 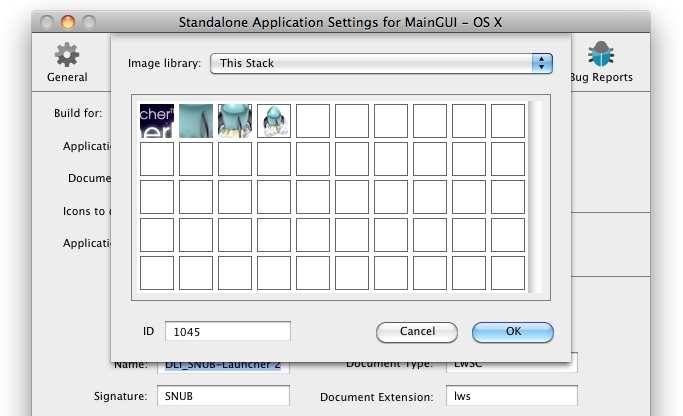 After doing this the icons still didn’t show up in the Mac builds as they should have. I spent quite a while trying to figure out why small icons weren’t working as documented in LiveCode’s answer dialogs. I read and reread the documentation many times thinking I may have been making a mistake somewhere. Next I figured that setting it up in the Standalone Settings would only show up in the standalone and not in the IDE, which make things more difficult to troubleshoot because you have to keep making standalone builds to test. So digging a little deeper I found that those settings are really just putting the icon IDs into two global variables gREVAppIcon and gREVSmallAppIcon. I added the following code to set those variables up even when running in the IDE so I could more easily test what was going on.

But even with this code, I could see that the IDs were properly set, but still no small icons appeared on the answer or ask dialogs. After not being able to get them to work as documented, I logged in and checked the open bug list. It turns out that the Mac OS X small icon functionality has been broken and reported since 2011. It looks like that functionality was removed to make it consistent with Windows and Unix builds, which don’t have such a feature, so it probably wouldn’t be fixed any time soon. Because LiveCode is itself built from stacks, including the answer and ask dialogs, I figured I could just hack up a quick fix myself. Looking at the answer dialog stack I could see that it must have been implemented in the past because the gREVSmallAppIcon global variable was declared, and there was a hidden second button icon, but they are never used in the current implementation. So to enable them is a trivial fix.

The trickiest part was just locating the dialog stack. On Mac OS X applications are really just folders called packages with all the necessary files packed inside. After properly backing up your LiveCode file and all data files just in case, simply right-click on the LiveCode icon and select “Show Package Contents” which will open the folder. 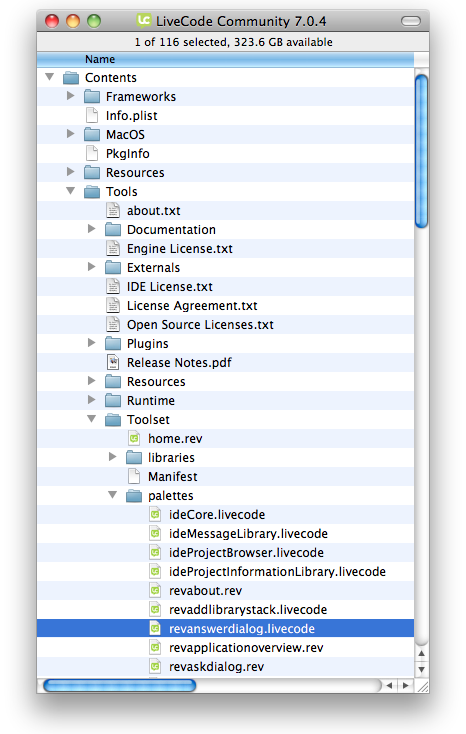 Inside the palettes folder you’ll find the revanswerdialog and revaskdialog files. Those are the stacks for the answer and ask dialogs. Again, before editing these files, especially because you’re editing files in the running app, backup the LiveCode app and all your data files first! You can open the answerdialog stack by double-clicking on this file. Another way to open this is from within the IDE by typing the following command into the message box:

One thing to be aware of is that because this answer dialog is part of the IDE it won’t show up in the Application Browser because it’s not normally something you would want listed in there for editing. Once the stack is open though you can go to the “Object” menu and select the “Card Script” command to open the card script. Then add the following code between the ## DLI comments in the preOpenStack handler located as shown in the image. 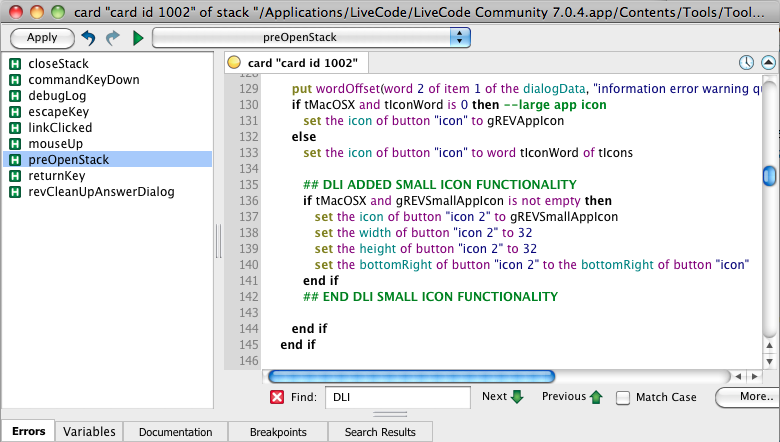 Then just save the stack and you’re good to go! The small icons will then work in the IDE as well as being included in any Mac OS X standalone builds that you make. A similar hack could also be applied to the ask dialog if you wish. The biggest drawback to such a hack fix is that you’d need to reapply it again if you upgrade LiveCode itself.