This Detailing the Instance Generator post is one in a continuing series of behind the scenes blog posts. They follow the production of the new director’s cut HD version of our 3D animated CGI short film – Fault Effect™. This short film is the pilot webisode from The Autiton Archives™ web series. The preliminary standard definition DV version of the CGI short film was produced for our companion book: Creating a 3D Animated CGI Short available on Amazon.com.

My previous post in the series described how I created an army of 800K marching robot Autitons using nested instances in LightWave 3D. Those Autitons were all marching through empty space however. In this post I’ll show how I created a massive 3D lattice consisting of over 5,000 hex clusters with interconnected corridors for all those marching Autitons to march through. 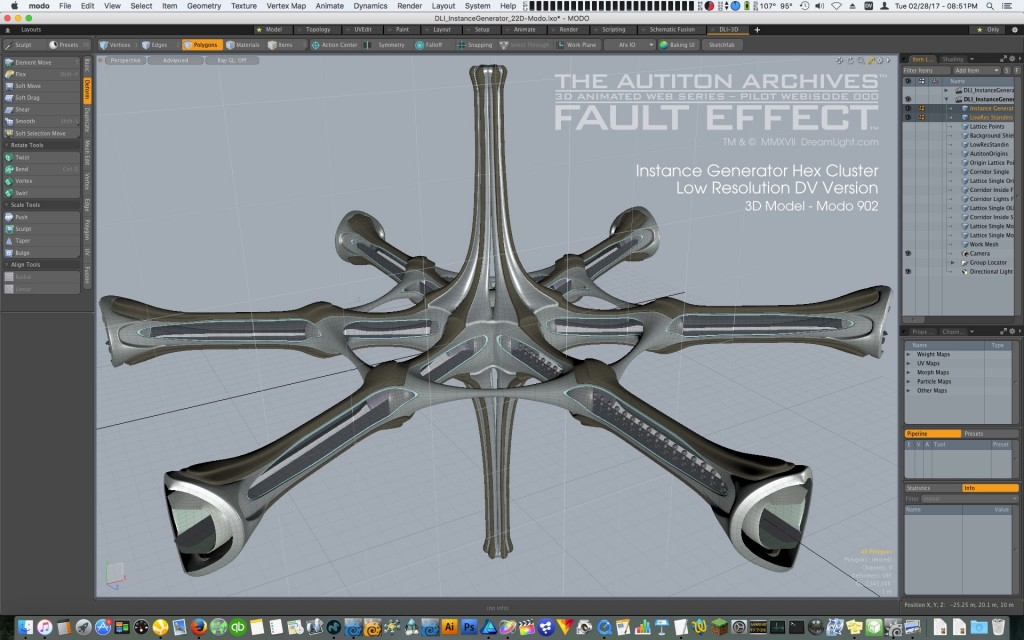 When I created the initial standard definition DV version of the film for the book – Creating a 3D Animated CGI Short, I designed the Instance Generator lattice from the outside in. I describe that design process in detail in chapter 11 – Designing the Instance Generator Lattice Exterior. I built the Instance Generator as a single hexagonal structure in Modo and then used DP-Instancer in LightWave 3D to create many instances of this hex cluster across a 3D lattice of 17 x 17 x 20 points for a total of 5,780 interconnected hexagons. I then flew the camera through this lattice structure for the opening title sequence. 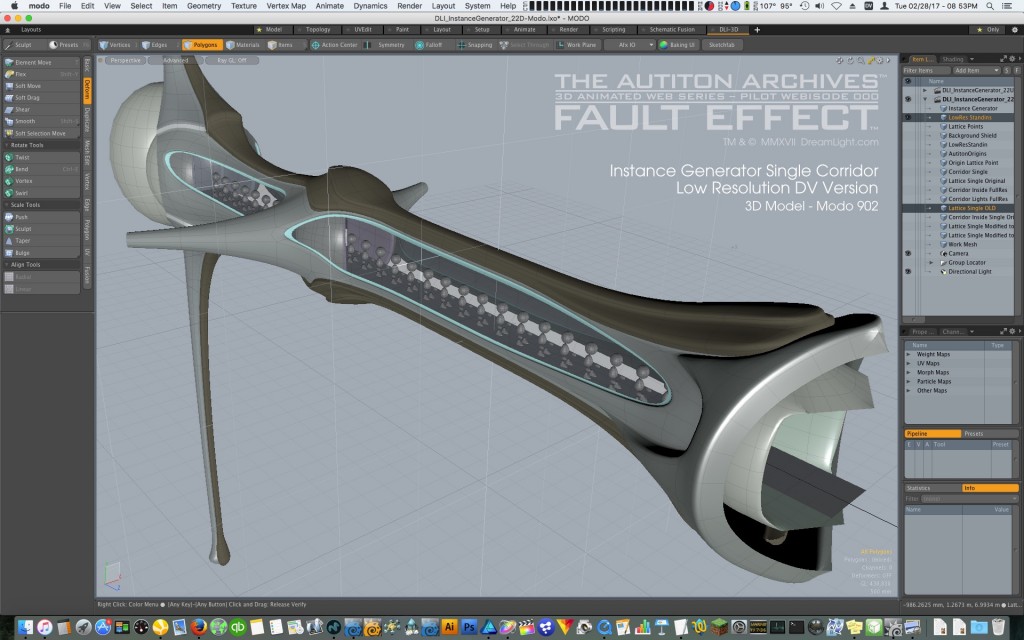 I only had to design and build one single corridor which I then duplicated five times using a radial array to create the hex cluster. I designed the outside of the Instance Generator lattice structure first with nothing but a low polygon simplified interior. I used this initial version for the opening title sequence in the standard definition DV version of the film because at that low resolution you couldn’t see much through the windows while zooming through the lattice anyway. 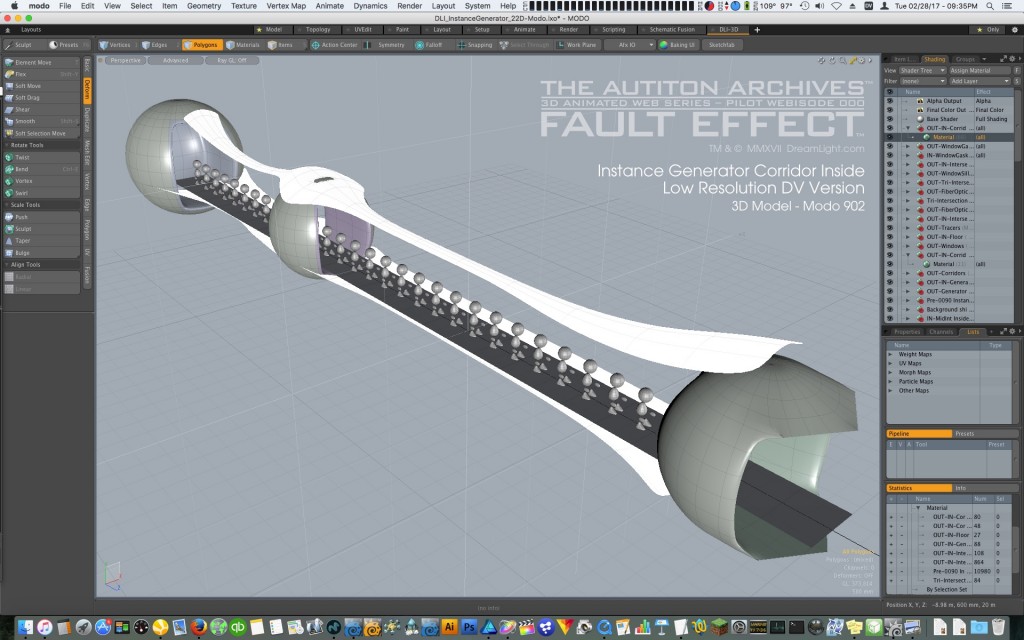 All I used for the interior of the corridor in the standard definition DV version of the film was a few rough shapes to give a hint at what would be found inside. I also used low polygon static stand-ins to give a hint at the Autitons. In the previous behind the scenes blog post I replaced those static stand-ins with 800,000 fully articulated marching robot Autitons. 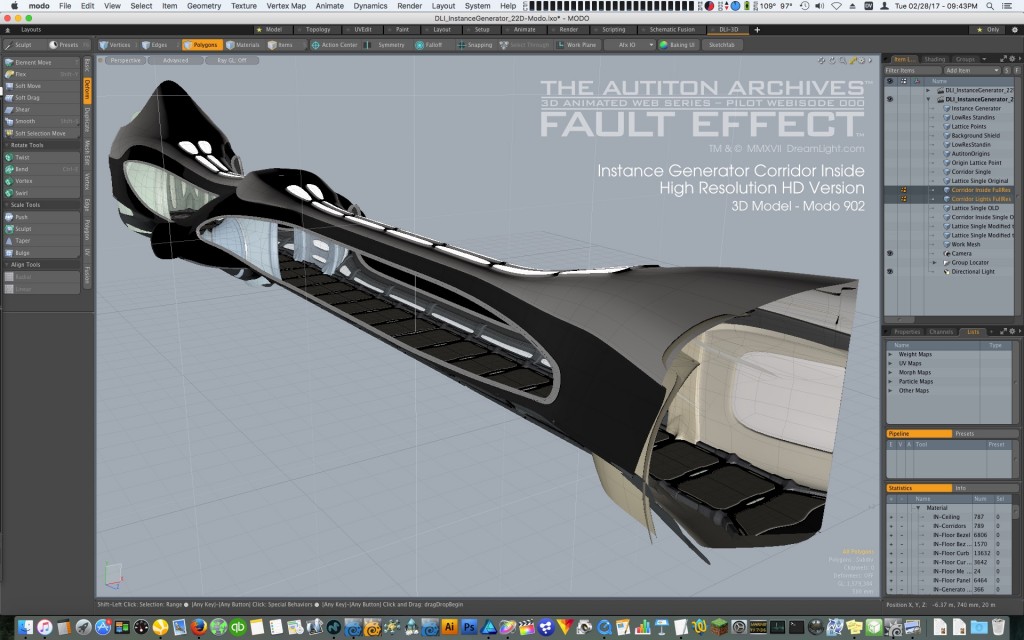 When I subsequently moved on to the production of the interior scenes I designed a far more detailed interior structure to be used for those interior shots. This design process was fully detailed in chapter 12 of the book: Designing and Modeling the Interior Set – The Instance Generator Assembly Line. Now for this new director’s cut HD version of the CGI short film I wanted to use the full interior set inside the exterior corridor that I had built previously. So I took the existing interior set model and lowered the subdivision smoothing level because in this case it would be seen at a distance from outside through the windows rather than up close. 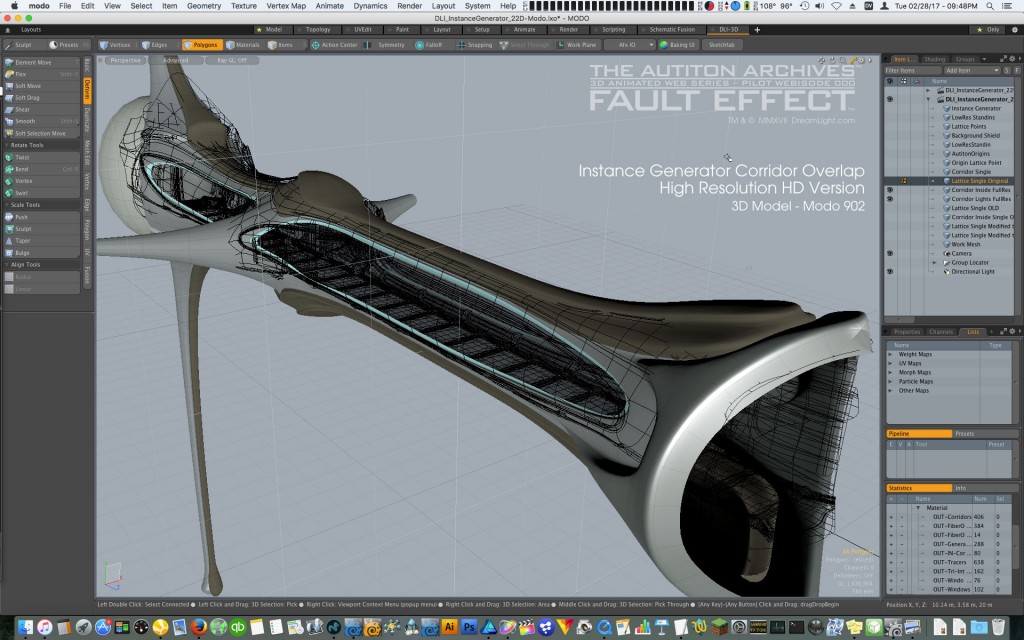 I placed this detailed interior model inside the exterior corridor model. You can see in the above screenshot that this resulted in portions of the interior overlapping and protruding through portions of the exterior. The interior model was initially designed using the original outside corridor as a starting point, but because the inside and outside were two different sets used in the DV version of the film they weren’t designed to actually fit together to both be seen at the same time. For this new HD version of the film however they would both need to fit together so that the inside and outside could be seen together. 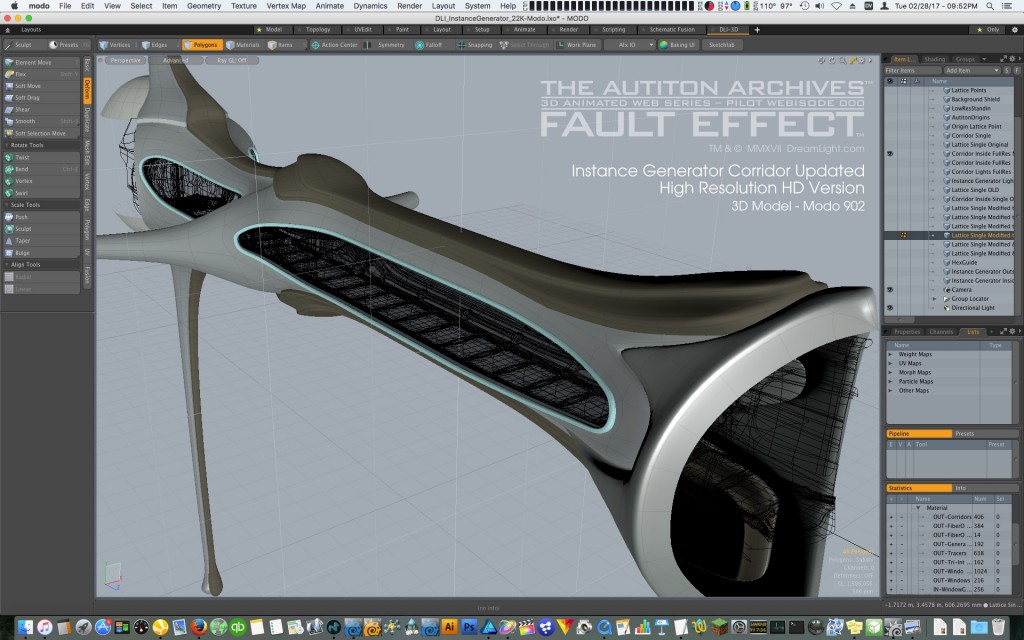 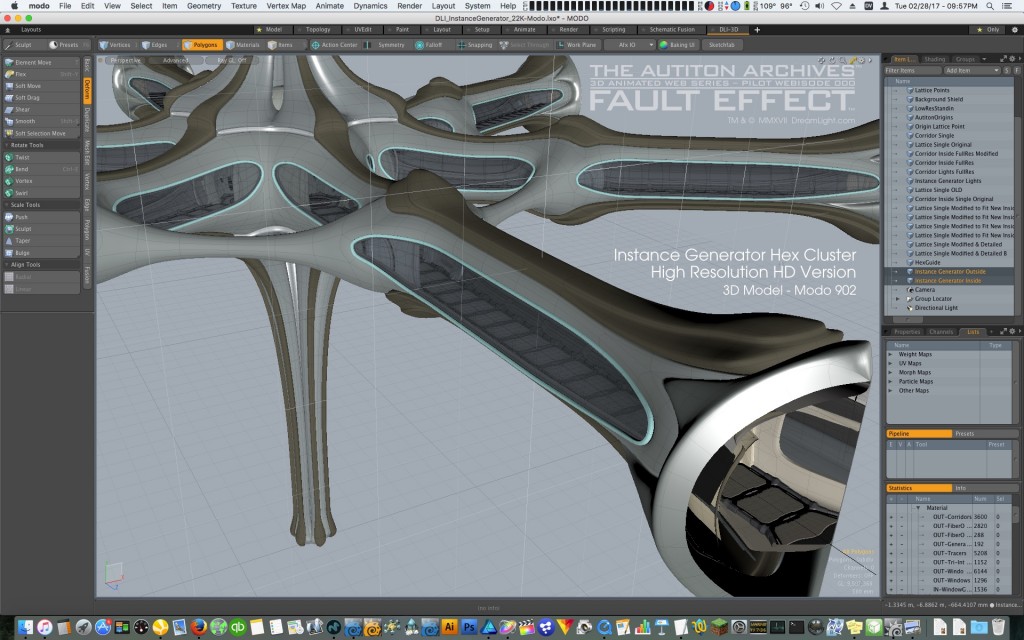 Once I had the single corridor model interior and exterior completed I then used radial array to reassemble them into a full hexagonal cluster Instance Generator. This new Instance Generator hex cluster model could then be brought from Modo into LightWave 3D where I could use DP_Instancer to create a 3D lattice of over 5,000 interconnected Instance Generators. 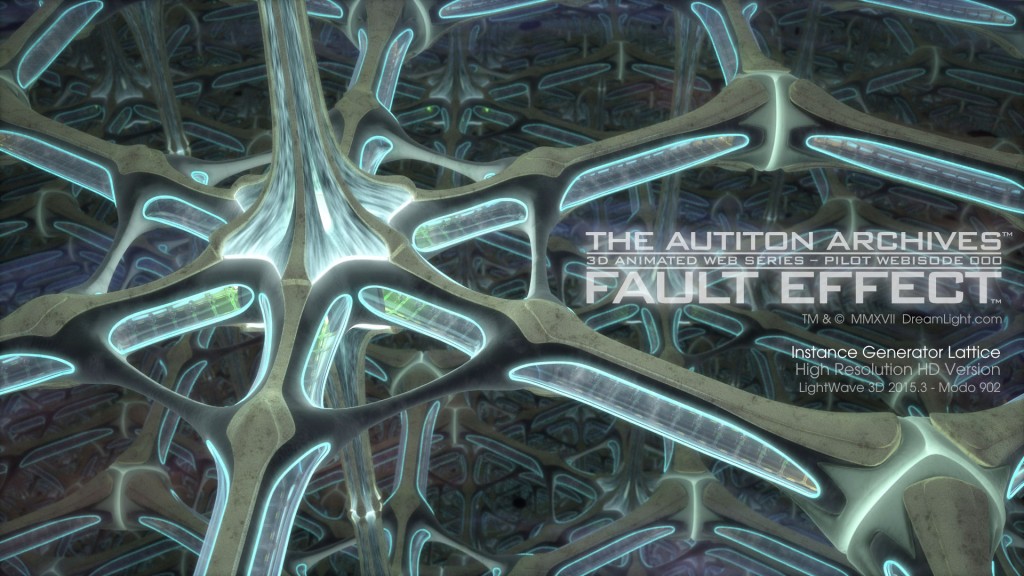 Here’s a render showing a portion of the Instance Generator lattice showing some of those 5,000 hex clusters and some of the 800,000 marching robot Autitons within the corridors.

If you found this brief behind the scenes blog post interesting you’ll love my whole book: Creating a 3D Animated CGI Short, The Making of The Autiton Archives, Fault Effect – Pilot Webisode. The book is over 500 pages chock full of detailed examples and insights from the production of my 3D animated CGI short film – Fault Effect. There’s a lot more information about this portion of the production in chapter 11: Designing the Instance Generator Lattice Exterior and chapter 12: Designing and Modeling the Interior Set – The Instance Generator Assembly Line..