We’re also pleased to note that NewTek based the Mac section of the Distributed Rendering chapter in their LightWave 3D 2015 manual on portions of our venerable old Mastering LightWave ScreamerNet (lwsn) for Mac OS X white paper that served as the genesis for this neat little utility.


The explanation in these docs is mainly written by Mike Scaramozzino from DreamLight Interactive and are published here with his kind permission. Mike has spent many years rendering using Screamernet and has created a tool to make it all much easier with no use of Terminal required. Visit his site at dreamlight.com and check out the DLI_SNUB-Launcher 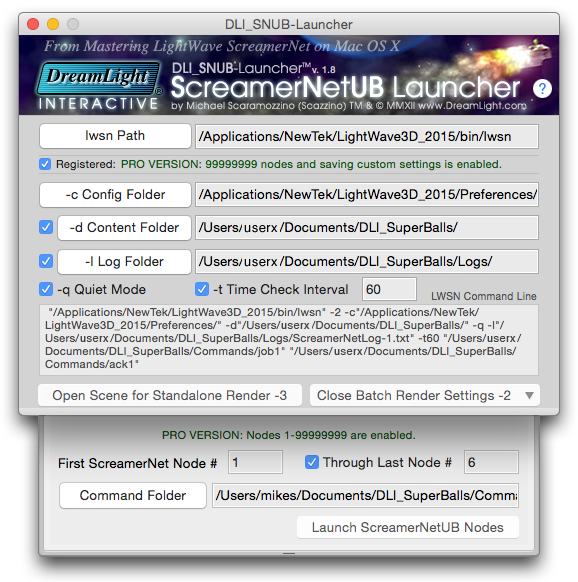 Hear What a Recent Customer Had to Say!

I really wished I’d filmed this…

I’m already rendering !!! I literally got the license a few minutes ago …. that was the quickest time I’ve ever set up anything…

Screamernet has literally brought me to tears in the past – in the fetal position on the ground…
I cannot believe how simple this was, how it gives you enough control to know what’s going on and shows you what it’s doing…

I’m very happy with your product.
Initially I was waiting for things to fail, or not work.. But it just worked. First time !

I got my render back in one hour instead of 7 !

p.s. In the past I was used to the IT people back at Digital Domain dealing with all of this, when we had literally thousands of machines at our disposal, I’ve now left LA and set up a studio in Nairobi, Kenya ! and I’m doing it all myself… Thank-you for making this part so simple, I was expecting insane headaches.