In celebration of America’s birthday today (4th of July – Independence Day) I whipped up this commemorative graphic after the festivities were rained out due to hurricane Arthur. It’s a textured image of the iconic colonial flag with 13 stars arranged in a circle, often referred to as the Betsy Ross flag.

I created the simple image by first modifying a public domain vector SVG version of the flag in Adobe Illustrator to get the basic shapes together. I brought that into Adobe Photoshop and rasterized it at a high resolution. I then applied various filters and textures with Filter Forge. I used some of those generated textures as displacement maps to simulate wrinkles and creases. The result is an antiqued flag that brings us back to the spirit of 1776.

Let’s not forget what it means to be an American. It’s worth taking a few moments today to re-read the document that changed the world, the Declaration of Independence: July 4, 1776.

The Declaration of Independence (as read by Max McLean) 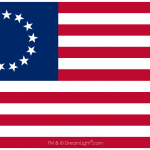 I first created a vector image of the flag design in Adobe Illustrator based on a public domain SVG version that I found on Wiki-pedia. The SVG version was a bit too wide and elongated for my taste though so I modified the vectors for a more pleasing aspect ratio that was more similar to other images of the colonial flag that I found online. 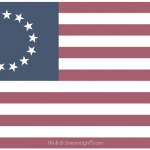 I then rasterized the vector image in Adobe Photoshop creating a high resolution raster version of the image for further manipulation. That way I could apply various filters and effects to the image to age and weather its appearance and transform it from a pristine vector graphic into an antique looking image. The first effect I applied was an adjustment layer to reduce the saturation and fade it out slightly. 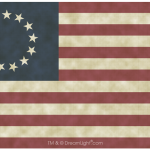 Once I had the raster image in Photoshop I then applied a Filter Forge filter to a new blank layer to create a linen texture. I cloned this linen layer three times and flipped/rotated each randomly to mix up the composite texture somewhat. I used the multiply blend effect to blend all the linen layers with the underlying flag. I also applied a grayscale image mask to each linen layer with a rendered clouds filter applied to each. This makes the linen texture on each layer fade in and out randomly as they mix together. 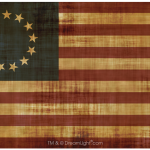 I next applied an aging filter in Filter Forge to another blank layer set to multiply to simulate an antique aged look. Filter Forge is fantastic for generating an endless variety of textures for use in 2D and 3D artwork. We use it so often that we’ve even created and published our own DreamLight series of animated Filter Forge textures. Once the flag was aged I then selected all the layers so far and turned them into a smart object so that the next steps could be applied to the entire group. 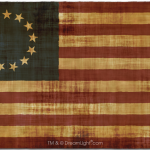 Once I had the flag appropriately aged it was time to give it a bit of a 3D depth effect. The underlying vector based image had perfectly straight edges on everything of course. This gives the image a too perfect computer look to it. A real flag would grayscale images using Filter Forge. One for creases and one for wrinkles. I saved these out as separate grayscale images and applied each as a displacement effect to the smart layer while also applying a slight bevel/emboss to the edges. This displacement slightly bent and twisted the underlying graphic as if the flag had real 3D wrinkles and creases. 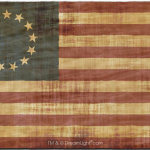 I finally placed the wrinkle and crease images into additional layers above the flag smart layer and set each to soft light blending mode. This gave a subtle lighting effect to match the displacement and make the wrinkles and creases slightly visible. The resulting image is an appropriately aged and weathered 13 star colonial flag, suitable to commemorate our nation’s Independence Day! – Enjoy!