In this post I will show you how to create normal maps from photographs. You can often create normal maps using dedicated software or plugins quickly and easily. I created a very easy to use Filter Forge filter – DreamLight_Normal-Map-Maker. I also created a node map based surface you can use right in LightWave 3D to generate your normal maps as well. Once you understand how normal maps work you can even create them from scratch using photographs in any image editor such as Adobe Photoshop.

First I will cover some basic information about what normal maps are and how they work. I will then show you how to create normal maps from photographs in Filter Forge, LightWave 3D or Adobe Photoshop. I will finish by showing how I used this technique in LightWave 3D for a recent project.

You can get Gold Coins similar to those I borrowed for this project on Amazon.com

What are Normal Maps?

Normal maps are a more advanced form of bump maps. They add simulated detail to a 3D surface. Where a bump map is a grayscale image that encodes elevation data, a normal map uses an RGB color image to encode normal vector directions in 3D. Before learning how to create normal maps from photographs it is a good idea to understand exactly what normal maps are and how they are constructed. 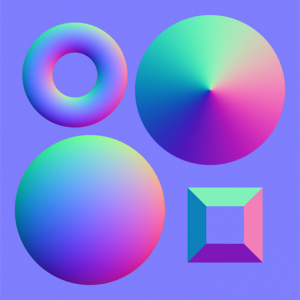 Let’s examine a simple normal map of geometric shapes by Julian Herzog from an article about Normal Mapping on wikipedia. Two things stand out immediately about this image. First there is a rainbow effect that progresses around the edges of the shapes. Second, all the areas facing the viewer are a lavender color.

Before we move on to learn how to create normal maps from photographs let’s take a look at how the XYZ vector data is encoded within an RGB normal map.

Normal maps use the three color channels R-red, G-green and B-blue to encode the X, Y and Z normal vector data in an 8-bit image.

Sampling and Analyzing Colors from a Sample Normal Map

Note: In the following images the color values are not exact due to clicking manually on the image rather than typing values into the text fields.

How to Take Photographs for Normal Maps

Now that we have a solid understanding of what normal maps are and how they are constructed we are ready to learn how to create normal maps from photographs. So it is now time to take some photographs. 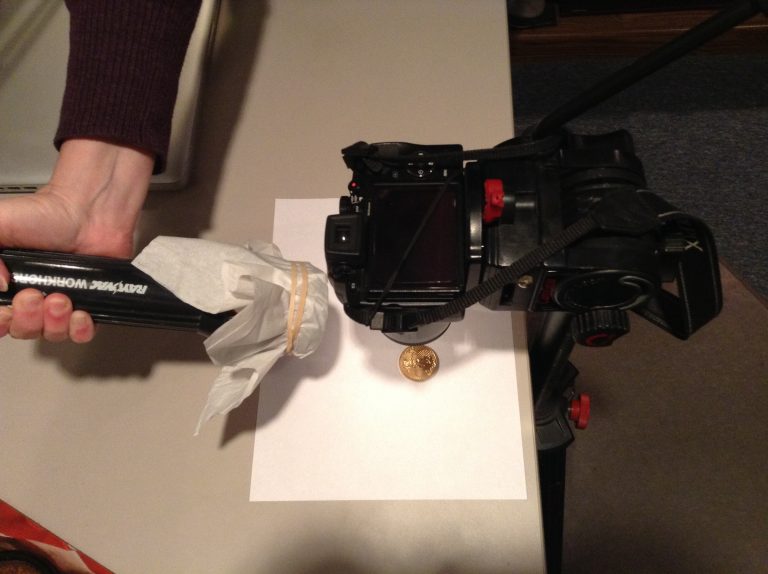 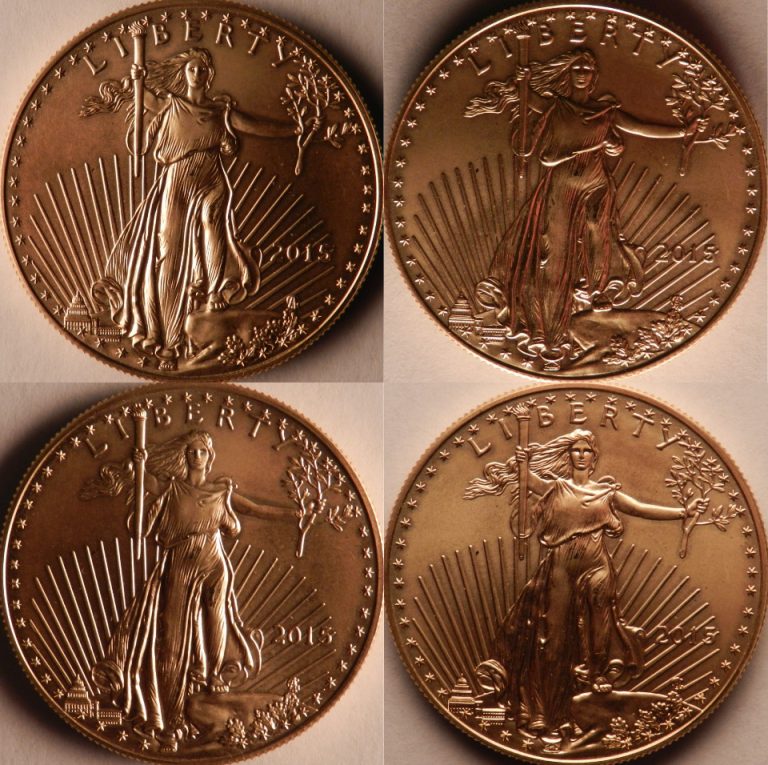 I created a filter for Filter Forge – DreamLight_Normal-Map-Maker. You may use the free version of Filter Forge with this free filter to generate normal maps very easily.

The logic used to create this Filter Forge filter is outlined below where I show you how to create normal maps from photographs with Adobe Photoshop step-by-step manually. 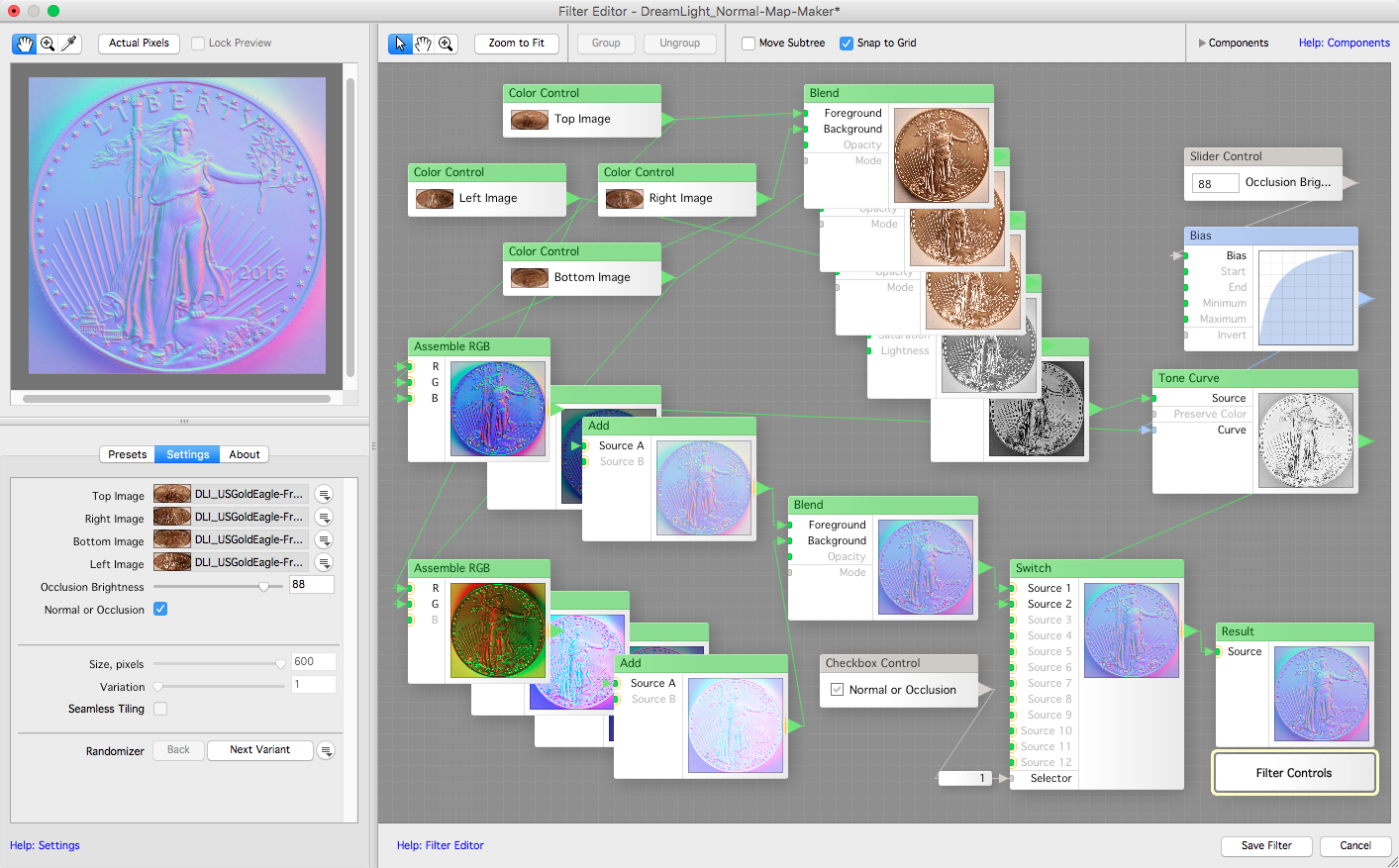 You may find all DreamLight’s Filter Forge filters at the following URL. Enjoy!

I created a nodal surface for LightWave 3D – DreamLight Normal Occlusion Map Maker. You may use this free surface to create normal maps from photographs directly in LightWave 3D.

The following screenshot shows the four image nodes feeding into a compound node that creates and outputs a color normal map and a scalar occlusion map.

You could pipe the compound node’s outputs into the normal and diffuse surface inputs to use them directly if you wish. That would not be the most efficient way to use it though because the normal map would need to be created every time it is used. Instead I’ve set it to pipe the color normal map into the surface color input, set the luminosity to 1.0 and the diffuse, specular and reflection to 0.0. 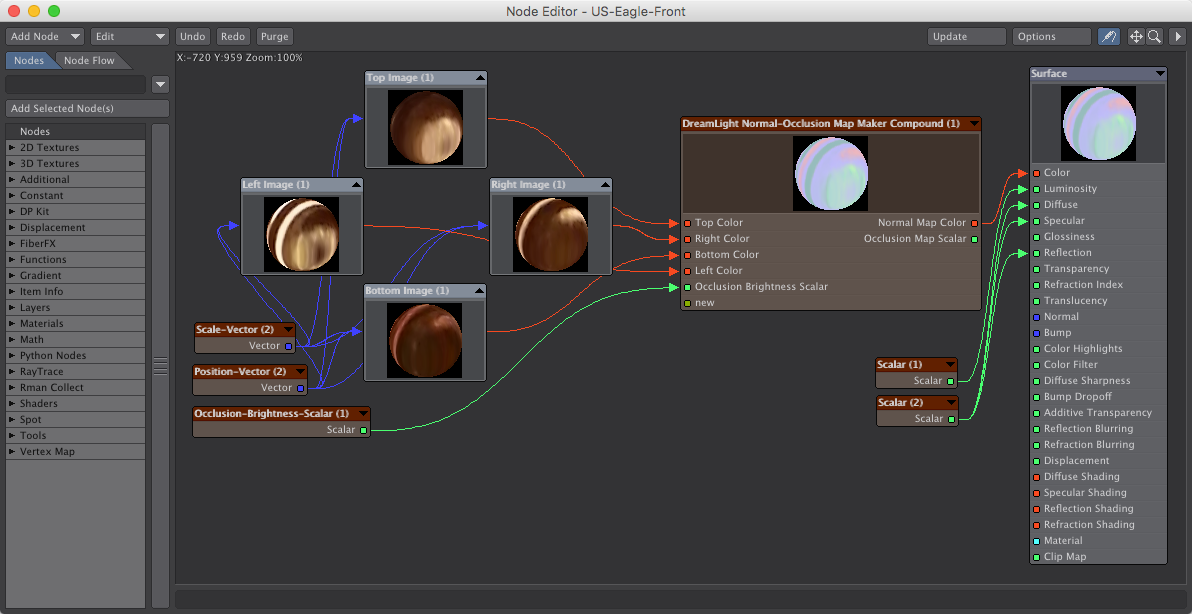 The following node map shows the nodes inside the compound node. The logic used to create this LightWave 3D node map is outlined below where I show you how to create normal maps from photographs with Adobe Photoshop step-by-step manually. 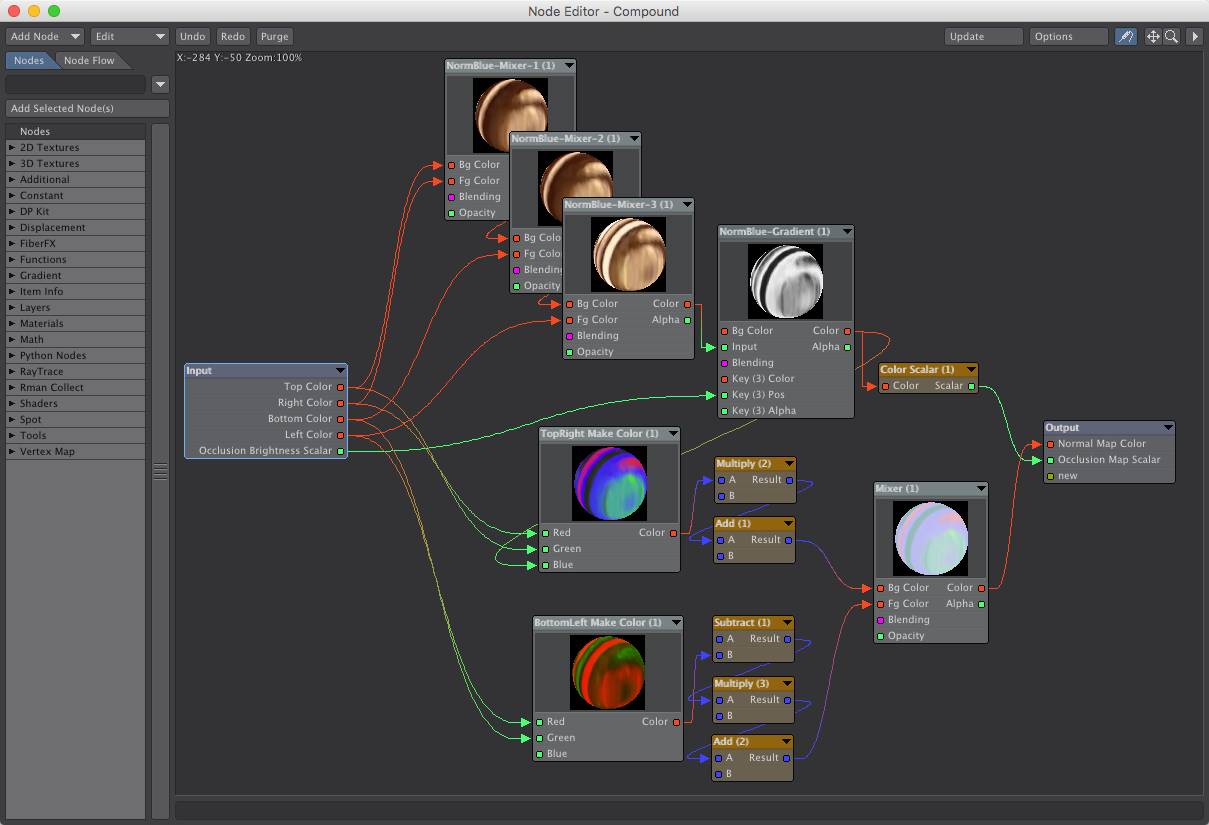 I’ve built a nodal surface that can be used to create normal maps and occlusion maps from four photographs. You may download the surface and try it out yourself. Enjoy!

How to Create Normal Maps from Photographs with Adobe Photoshop

Below I will show the step-by-step logic that was used to create the node maps for the DreamLight Normal Map Maker LightWave 3D surface and Filter Forge filter above. [There are even online utilities that may be used in a similar manner. Here is one example of an online normal map creation utility, NormalMap-Online. If you set that utility to a strength of 1 and invert the R, you will end up with a normal map close to what we will create below.]

Now for those who really want to roll up their sleeves and learn how to create normal maps from photographs manually in an image editor such as Adobe Photoshop I present the step-by-step process.

Create the Blue Layer in Photoshop

The trickiest channel to create is the blue channel. This represents Z vectors from blue = 128, Z = 0, laying on the polygon plane (in any circular direction indicated by the red/green amount) to blue = 255, Z = -1, pointing outward perpendicular to the plane. The completed blue layer may also be used as the basis to simulate an ambient occlusion map and specular map because vectors pointing perpendicular to the image would normally also be those that are less occluded and more specular.

You could just take a fifth photograph with the light directly perpendicular to the object, but I couldn’t get the right angle due to the size of my camera and the close proximity didn’t allow the light to be placed at the proper angle. So I figured I would construct it by compositing the four side lighted photographs instead. I had initially tried using the shadows from each of the side lighted images to make the composite blue channel but that ended up looking a little rough and splotchy. The highlights are smoother than the shadows so I’ve updated this section to composite the blue channel using the inverse of the highlights instead of the original shadows as follows. 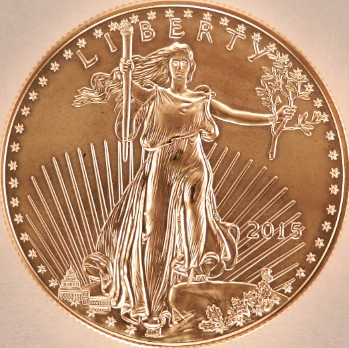 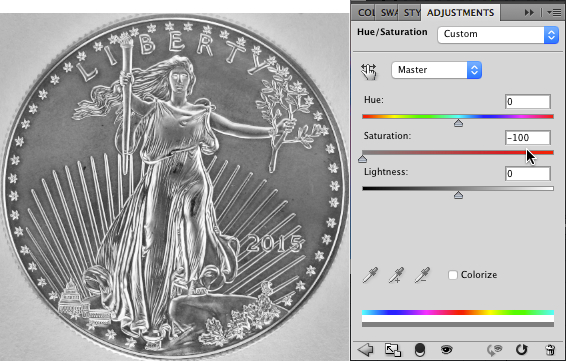 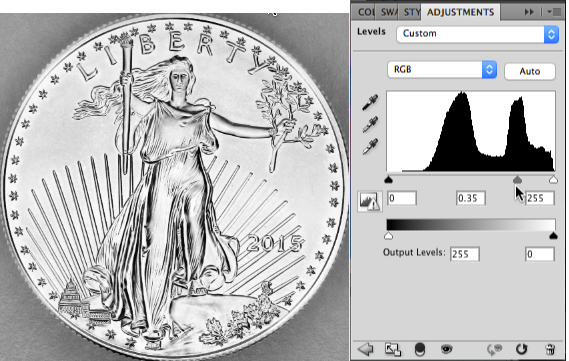 This results in an image where all the areas facing the viewer are light with smooth shadows for all areas tilting away from the viewer.

At this point in learning how to create normal maps from photographs we have all the necessary ingredients. We have the photographs that capture the lighting from the four sides, top, right, bottom and left. We also have an image composited from those photographs that simulates light perpendicular to the image. Now it’s time to put the images into the appropriate color channels to create the actual normal map. 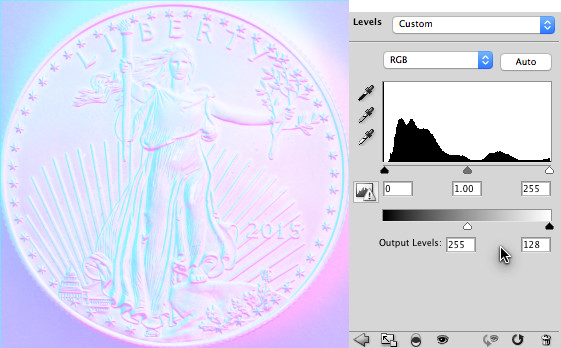 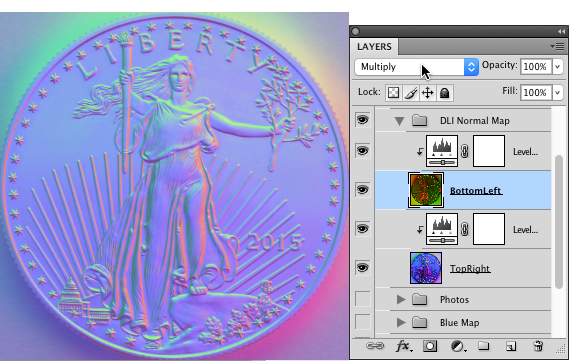 I used adjustment layers throughout so that you may tweak them as desired to adjust the overall balance if necessary.
Export this finished normal map as a png image.

How to Apply Normal Maps in LightWave 3D 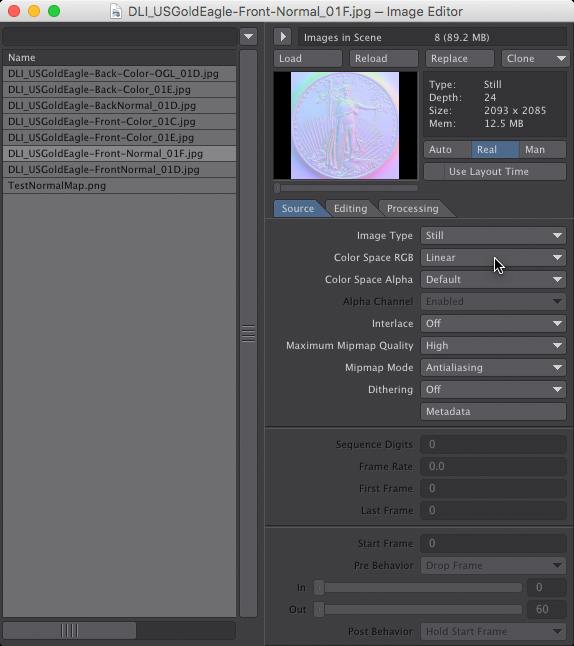 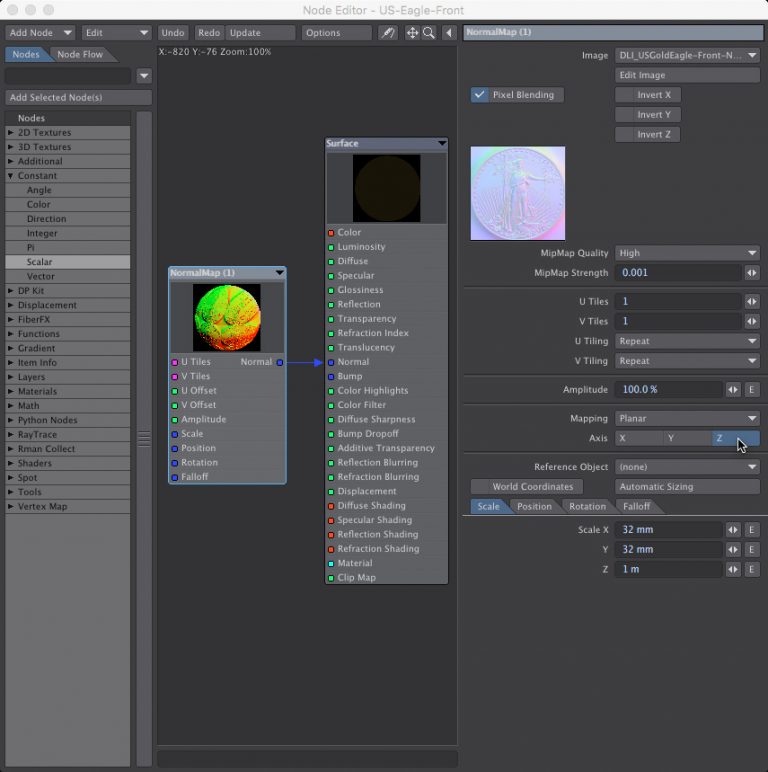 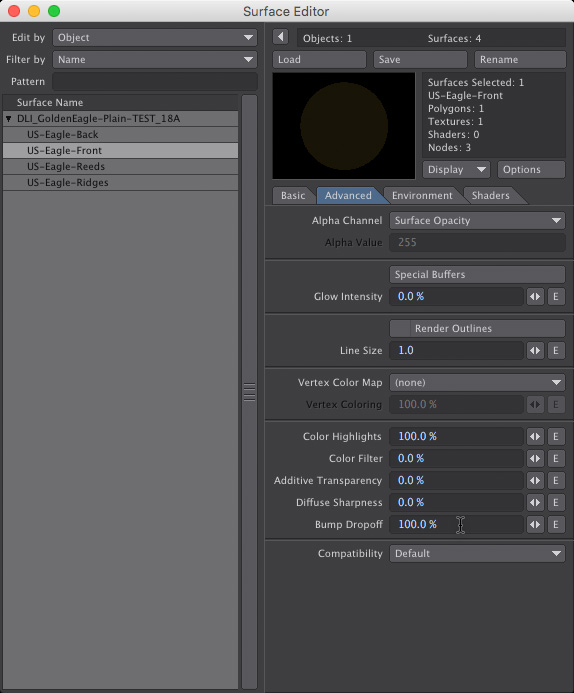 Move a light around with VPR on to make sure all the normal vectors are properly oriented. Verify that the light behaves properly as it moves around the object.

Viewing the Results of How to Create Normal Maps from Photographs

Here are some simple examples of using the results of this process of how to create normal maps from photographs. A still test render and a bullet dynamics animation test created in LightWave 3D for a new animation project currently in development – Heads or Tails. Enjoy! 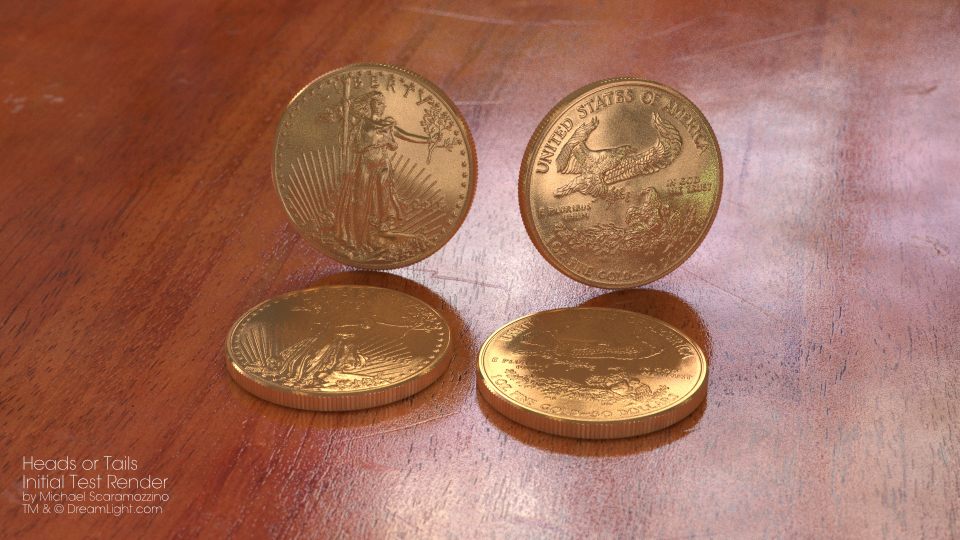 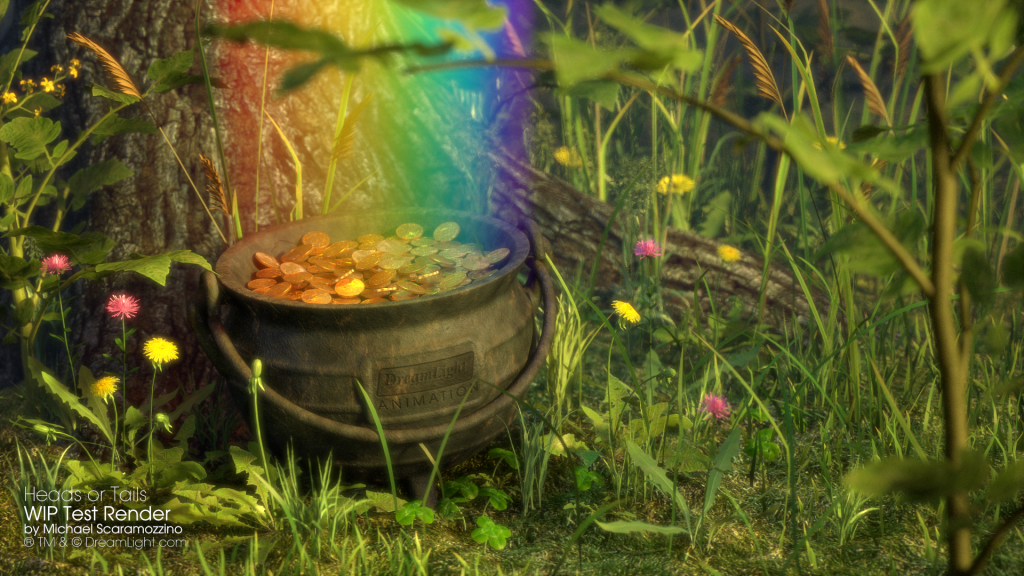 This is an early work-in-progress (WIP) test render from another shot in the same animation project under development – Heads or Tails. This is just an initial test of using a pile of coins in a pot of gold at the end of a rainbow created by a volumetric light. Most of the plant models are from XFrog’s free plant samples and VizPeople’s free grass samples. I refined some of the models and improved their surface textures for what I needed.

And here’s the finished result…

You can get Gold Coins similar to those I borrowed for this project on Amazon.com