With MacOS X High Sierra 10.13 Apple moved from MacOS Extended (Journaled) also known as HFS+ to a new disk format Apple File System known as APFS that allows higher performance on state of the art solid state drives (SSD). From MacOS X High Sierra and newer all internal system SSD’s are automatically formatted as APFS volumes without the option to format them as the older HFS+. Normally this is fine because APFS allows better performance of an SSD. However there are a few instances where this can cause problems. So there are some cases where you may want to reformat an APFS drive as HFS+.

I recently ran into just such an issue. I had MacOS X Sierra running on a MacBook Pro because some older software that I still use wasn’t compatible with newer systems. The battery was failing and I needed to bring it in for repairs. I knew that sometimes during repairs they wipe the contents of the internal drive. So I backed up the entire SSD onto an external Time Machine RAID drive before bringing the system in for repairs. I wrote on the repair order and asked the Apple genius to try to just replace the battery (which requires the entire top case on this model) without upgrading the system on the drive because I still use older software. They said they would include that on the repair order but couldn’t guarantee anything.

When I received the repaired MacBook Pro in only a few days, they had indeed wiped the SSD and installed MacOS X Catalina. I thought, OK, no problem, I have an entire Time Machine backup so I’ll just wipe it and reinstall from Time Machine. I had used Time Machine before and it’s extremely simple and robust.

I booted into recovery mode with command-R and attempted a Time Machine system restore. Unfortunately I was greeted with a challenge in the following error message:

MacOS X Catalina forces the internal drive to be formatted as APFS and Time Machine is not able to restore an HFS+ system backup onto an APFS formatted drive. It also gives no option to simply reformat the drive to HFS+ before restoring the system.

No Easy Option to Simply Reformat an APFS Drive as HFS+

So I then went into Disk Utility and figured I’d just reformat the drive as HFS+ manually first. Unfortunately Disk Utility doesn’t give you the option to do that on a drive that’s already formatted as APFS. Since this recovery mode was running on Catalina I figured maybe the Catalina Disk Utility doesn’t give an HFS+ option for the internal drive. So I next tried Internet recovery mode by booting with option-command-R held down. I was hoping this would allow me to format and install the original version of the MacOS that came with this MacBook Pro. Unfortunately that also booted into the current version of MacOS Catalina.

I had an external hard drive with various partitions of previous MacOS systems. The version of Sierra I had was before this MacBook Pro was released and wouldn’t boot it. So I booted into MacOS X High Sierra with the external drive instead and was finally able to use Disk Utility to reformat the drive with HFS+.

How to Reformat an APFS Drive as HFS+ with Disk Utility 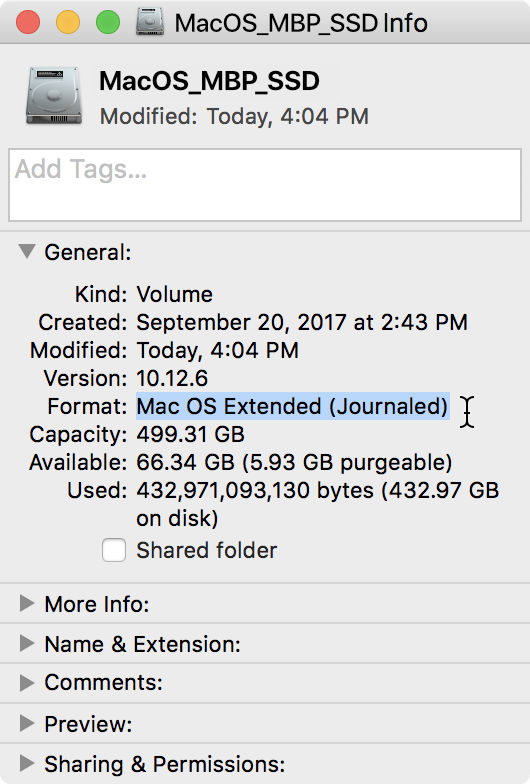 [CAUTION: BACK UP ALL DATA FIRST. USE AT YOUR OWN RISK!].

Once the internal SSD was reformatted as HFS+ I was then able to restore from Time Machine without any further problems.

In my research I did come across a number of posts that showed how to do this in terminal. But these steps in Disk Utility are easier and probably safer for most people who are not familiar using Terminal or Unix/Linux commands.

I hope this post helps someone who finds themselves in a similar situation!

If you enjoyed or found this post useful please support our efforts by supporting our sponsors, commenting and/or sharing. As an Amazon Affiliate we may earn a small commission, at no additional cost to you, from any purchases made after clicking links on this site.

Thank you for your support!