“Could not find any scan information. The source image needs to be imagescanned before it can be restored.”

However Disk Utility would not let me scan the image. No matter what I tried, every time I selected Scan Image in the Images menu with the disk image selected I would get one of the following two error messages:

How to Restore a Disk from a Disk Image in Disk Utility if Unable to Scan Image. It turns out you can use Disk Utility to restore such a read/write disk image bypassing the “invalid argument” error by using a different set of steps to select the source volume. Normally you simply select the disk image file itself as the source to restore from. But that needs to be imagescanned and can’t be. If you select the actual mounted volume instead it doesn’t need to be imagescanned first. The problem though is that the mounted disk image volume sometimes doesn’t appear on the Disk Utility sidebar and it can’t be selected using the “Image…” button because that only allows you to select a disk image file, not a volume.

The simple solution is to first mount the disk image and then drag the mounted volume icon from a Finder window and drop it on the source text field on the Disk Utility window. That will accept the mounted volume and the restore should then proceed normally. 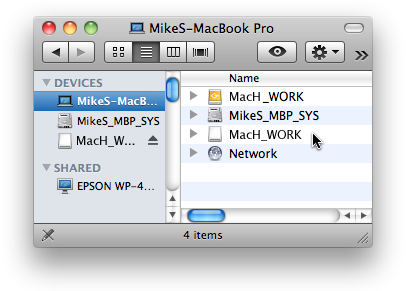 Copying a Volume via the Restore tab

Cloning Your Data to A New Hard Drive in Mac OSX