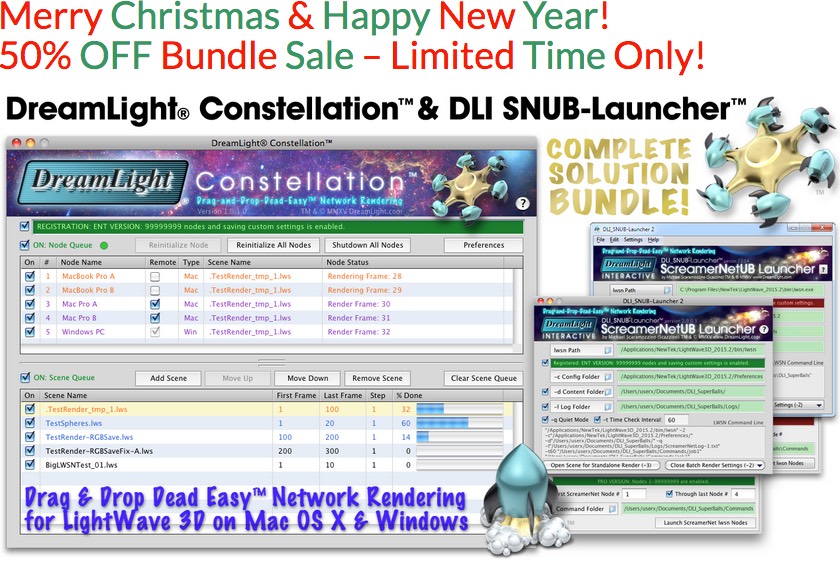 For a limited time only we’re offering a 50% discount on new purchases and/or upgrades of DreamLight Constellation & DLI_SNUB-Launcher bundle licenses.

DreamLight® Constellation™ is a drag-and-drop network render controller for LightWave 3D’s network rendering system – ScreamerNet. LightWave 3D Layout includes a basic built-in Render-Q and basic Network Render panel but using them ties up LightWave Layout. Using DreamLight Constellation to manage your background and network ScreamerNet rendering instead frees LightWave 3D so that you may continue working in Layout while rendering. DreamLight Constellation also includes many features beyond what’s available in LightWave’s built-in Network Render controller or Render-Q, including the ability to remap file paths for local/remote and Mac/Win render nodes. (Render nodes are instances of LWSN, normally one per computer.) The dynamic drag-and-drop scene render queue may be reordered on the fly and scenes may be added or removed at any time while the network continues to render. Scene render settings may also be overridden when scenes are added to the Scene Queue.

DreamLight Constellation may be used as a replacement for LightWave Layout’s built-in Network Render Panel or Render-Q. It may also be used as a replacement for discontinued third party Mac OS X network render controllers such as Jonathan Baker’s ScreamerNet Controller for Mac OS X or Bruce Rayne’s RenderFarm Commander as well as other third-party network render controllers on both Mac OS X and Windows.