This month’s peek behind the scenes tutorial will show you how to model for 3D printing with modo. It will walk you through the major steps I took to create a completely closed watertight mesh for use in 3D printing from a recent project where I created a 3D model of a head and shoulders with open mouth and throat to be 3D printed. The client wanted to use the 3D printed model to help train throat surgeons. 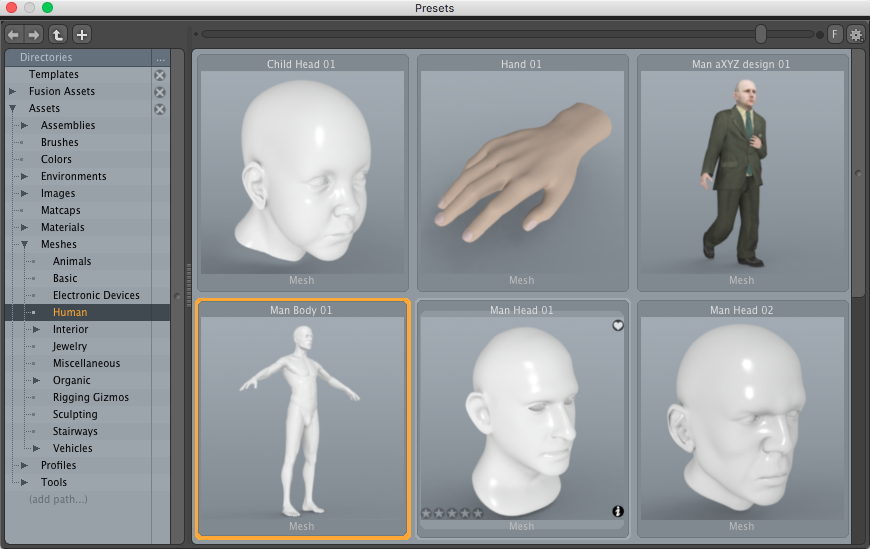 I began the process with modo’s stock model, Man Body 01, which I used for the external portion of the head/shoulders that I would need. 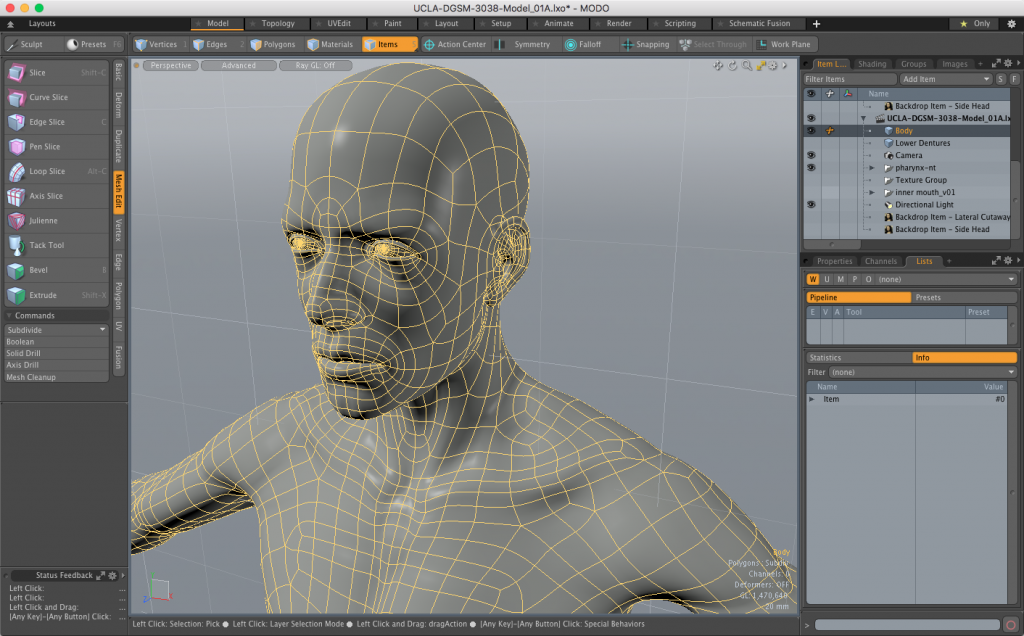 I then modified the mesh to open the mouth and tilt the head back. I hand edited the mesh points to stretch and smooth the lips and to adjust the jaw/neck area to look natural in this new position. I used reference photos and looking in a mirror to see what the lips, jaw and neck should look like in this position. 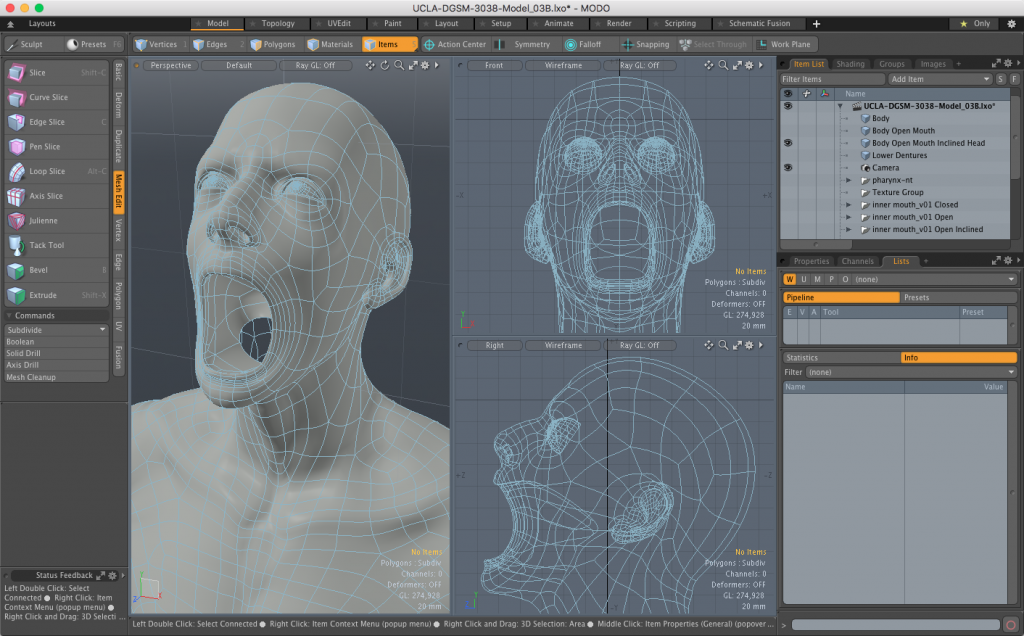 Adding a Good Set of Teeth and Gums

This human body 3D model had no inside portions so I located an inner-mouth model and an inner-throat model off Turbo Squid to use as a basis for the areas of the model that I needed. 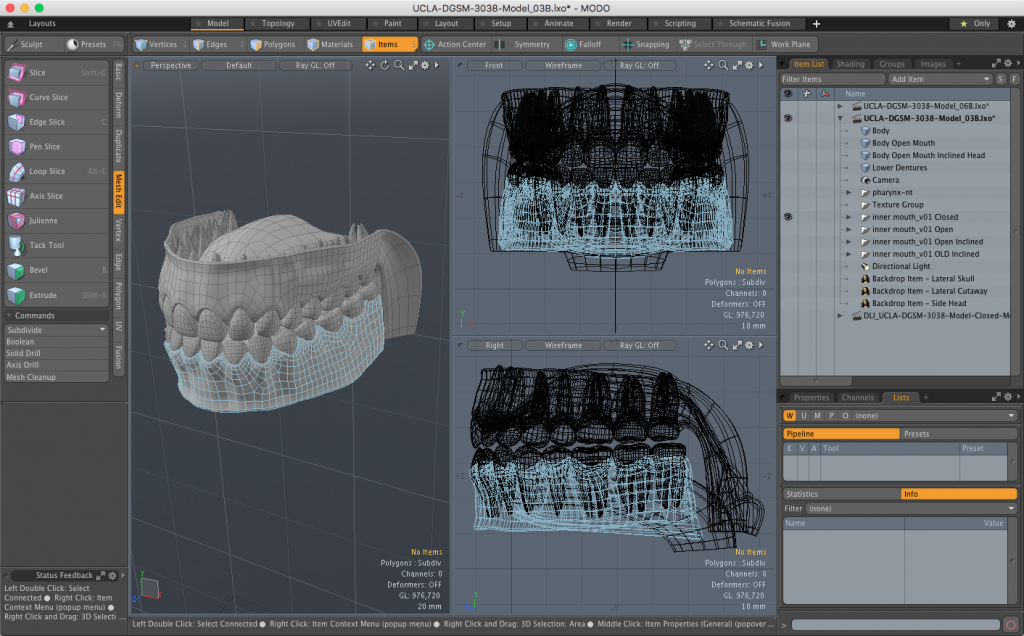 The inner mouth model that I found had the teeth, gums, tongue and roof of the mouth which would save me from having to create everything from scratch. I would need to modify it by scaling/rotating the parts into the proper configuration, improving the anatomical accuracy of some areas and then merging the gums into the inner portion of the head model to create a seamless mesh for 3D printing.

I rotated the bottom jaw of the mouth model around the point where the full jaw would be hinged, near the ear. 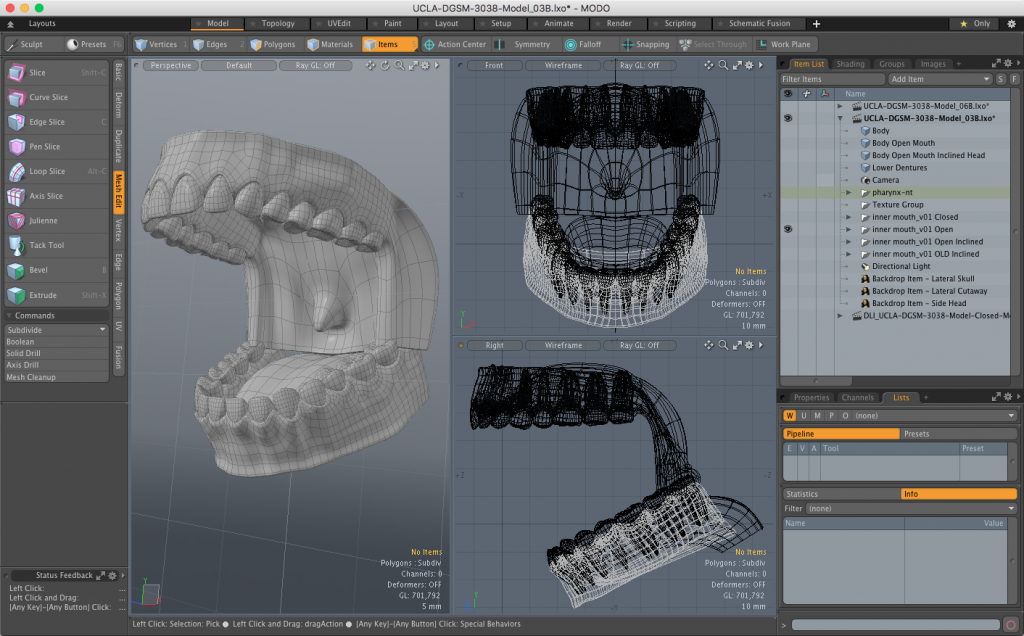 I next rotated the inner mouth into the proper position to fit the inclined and opened mouth. I hand edited the gum/inner mouth mesh to merge the upper/lower gums and inner mouth surfaces to be more anatomically accurate than they were in the original starter models. I extended and refined the mesh down to where the top of the throat would begin. 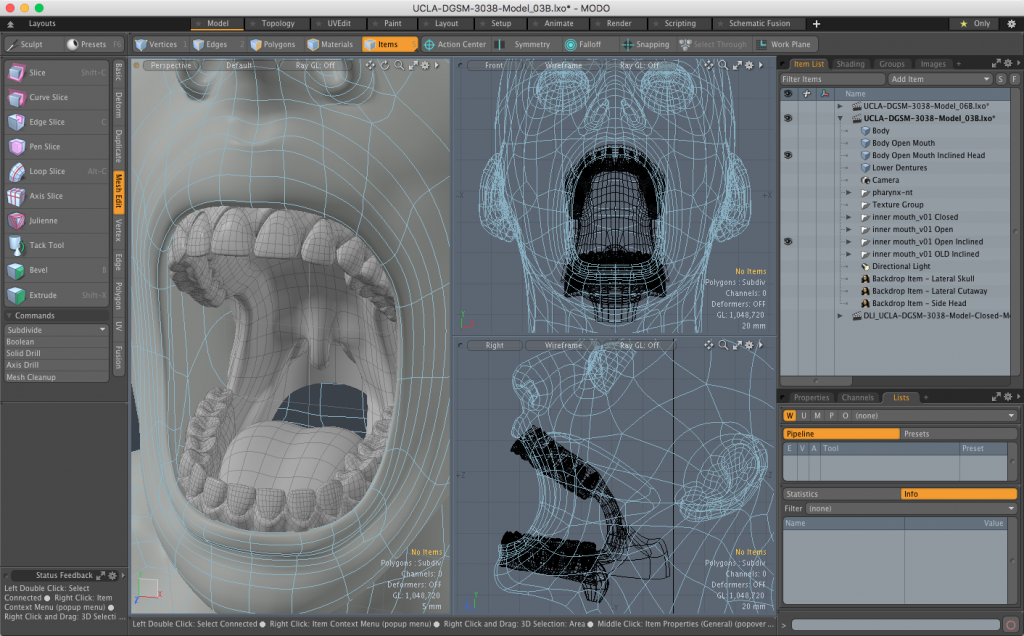 Adding a Full Throat to the 3D Model 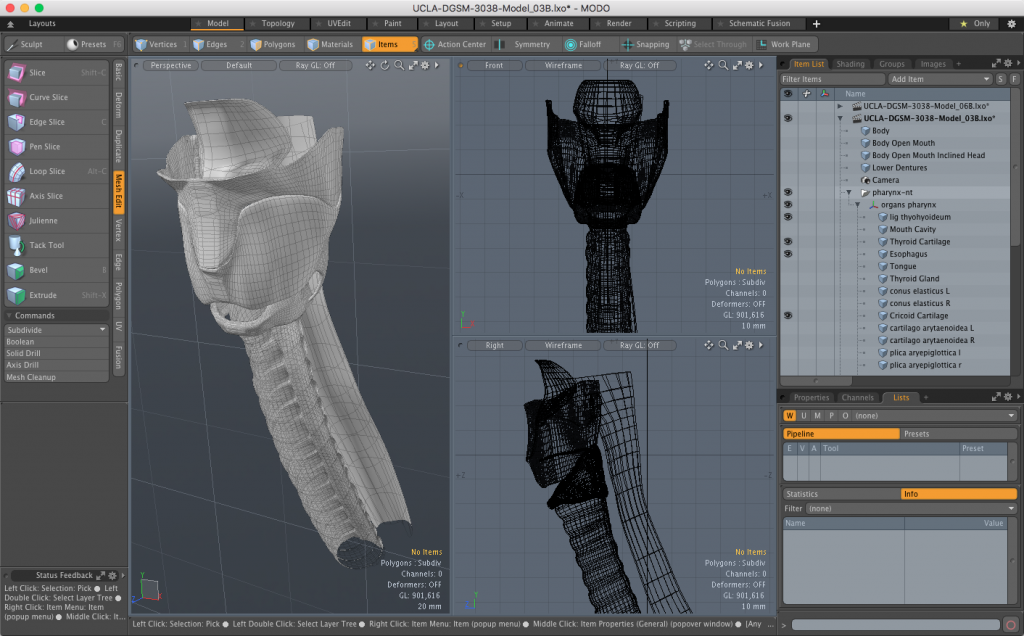 I scaled and rotated the rough throat parts into position within the inclined head/shoulders. The throat parts were not as anatomically accurate as the mouth was so I had to hand edit the meshes quite a bit more for the throat parts. 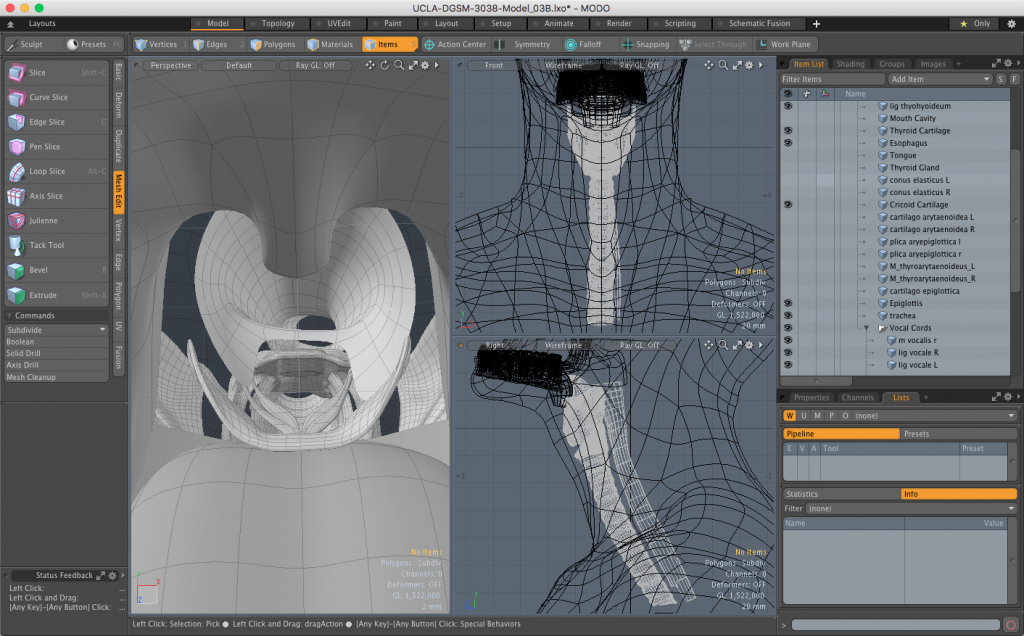 I worked from online medical illustrations and actual endoscopy photos supplied by the client in order to most accurately model the required anatomy. I wanted these inner portions to accurately reflect the anatomy that throat surgeons would see in an endoscopy. 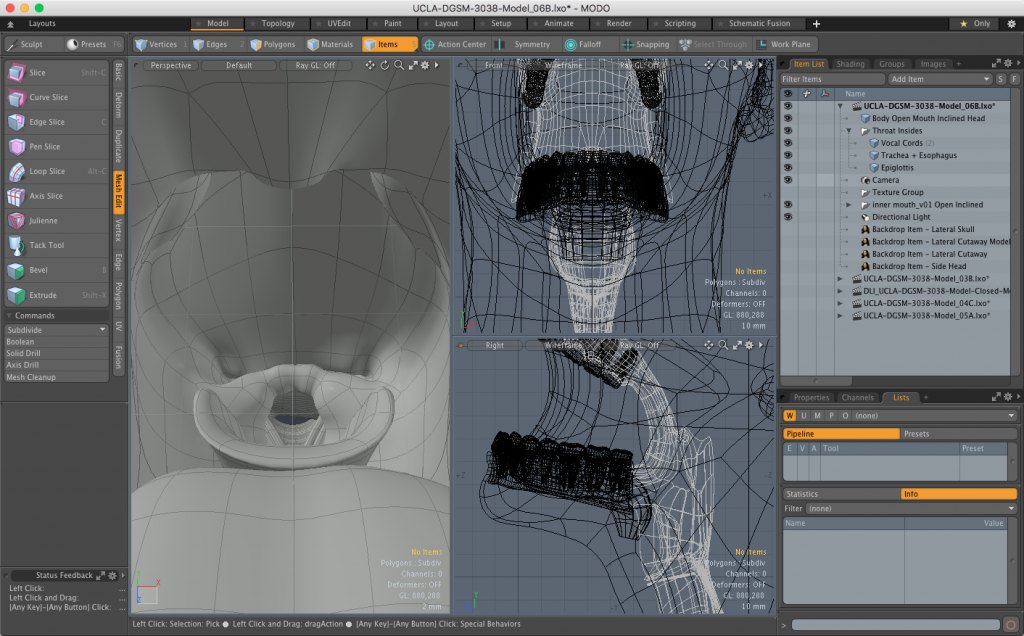 Once I had all the parts built and refined I next had to go through a few different phases to get all the separate parts stitched together into a single mesh. First each object with open surfaces needed to be closed. Then they all needed to be merged together into a single closed mesh using boolean union operations. Creating such a closed, or watertight model is one very important requirement in how to model for 3D printing.

The first step was to go through all the objects to make them all closed and watertight. For objects that were simple surfaces rather than closed objects, like the trachea, I extended the edges along the ends and then wrapped them around and closed them off. I extended each object large enough to intersect into the surrounding objects so that they could be merged together with boolean operations. 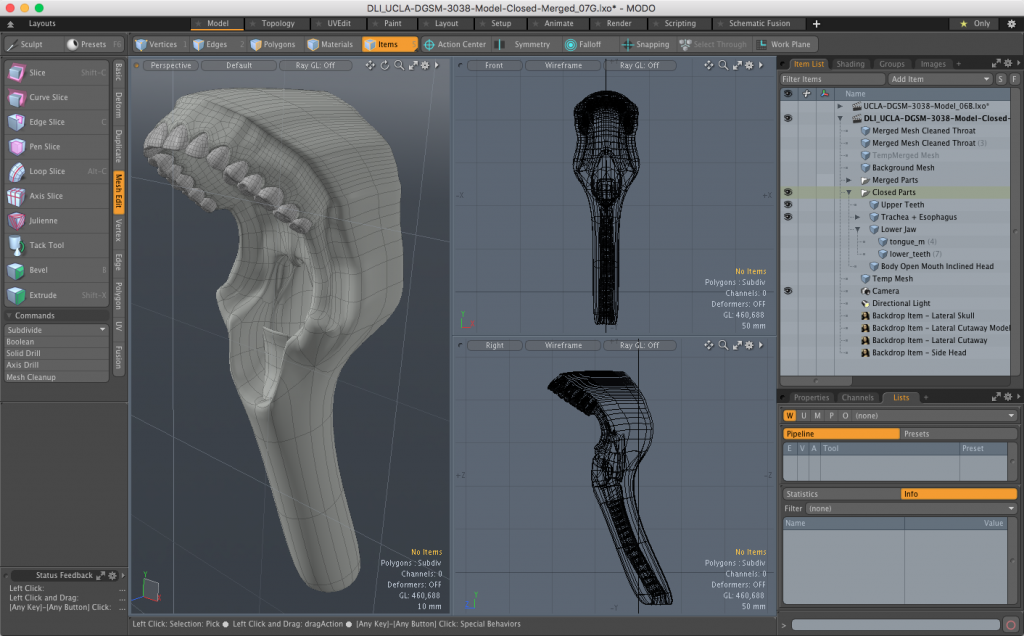 Once all the objects had been closed off so that they overlapped each other I then went through the process of merging them together. I worked with a couple of items at a time. I froze the subdivision meshes into much finer meshes and then did boolean unions a few objects at a time. 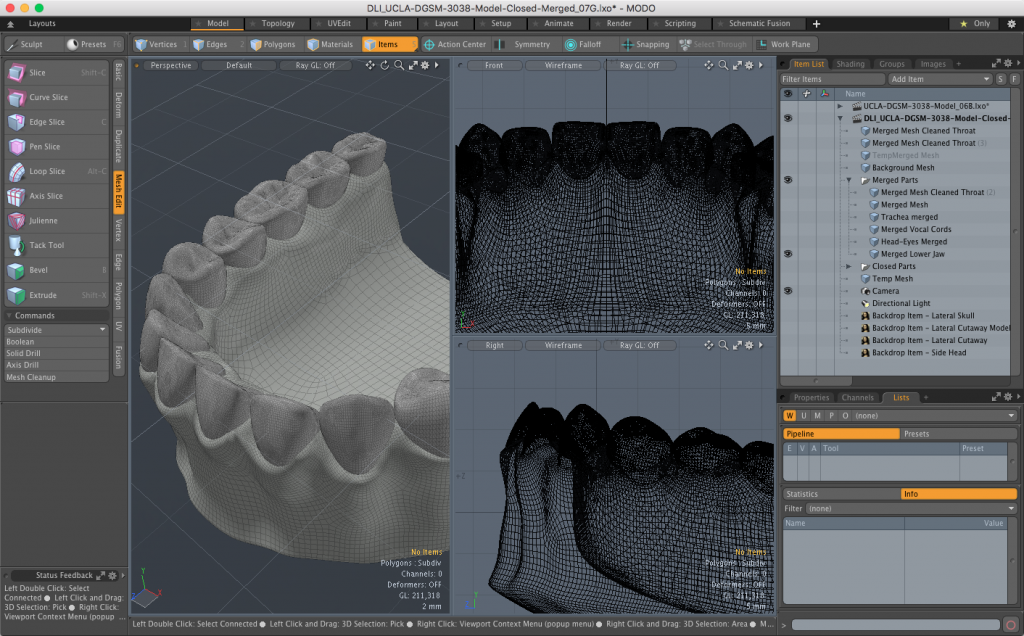 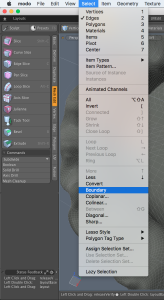 Above you can see that when the teeth are merged with the lower gum using a boolean union operation the roots of all the teeth disappear resulting in a single seamless mesh. This is important for 3D printing to assure there are no hidden overlapping surfaces.

Sometimes a boolean operation may not result in a cleanly closed object but rather an open mesh surface. This situation is easy to isolate and fix in modo. In the following image I’ve performed a boolean union on the tongue and the lower jaw after which it left a few areas unclosed. In Vertices mode I then simply selected Select->Boundary from the menu.

You can see a few of the points that were selected by using the Boundary command. These are points along the edges that are not closed. These open edges need to be closed in order to perform further boolean operations or to use the object for 3D printing. 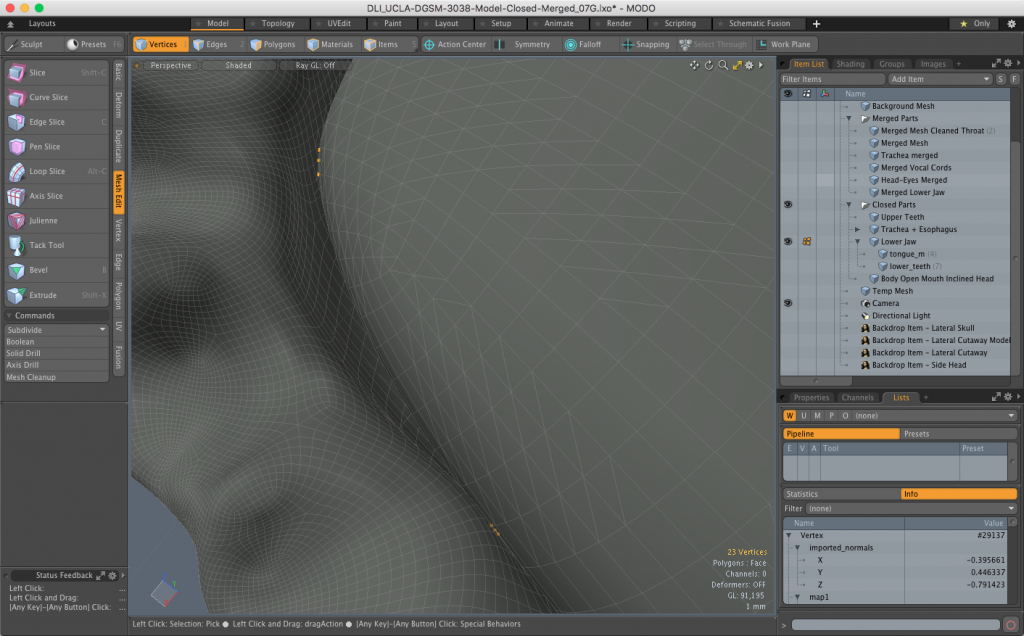 While still in point mode, select the merge tool. Click and drag until all the points disappear. Then try Select->Boundary again. If no additional points are selected then it means there are no more open edges and the object is watertight.

I repeated this process to boolean all the objects together a few at a time until the entire model was a single mesh. I used a simple cube to cut the head/shoulders off just below the shoulders so that it would have a flat base. I then manually cleaned up any remaining problem areas with the mesh. 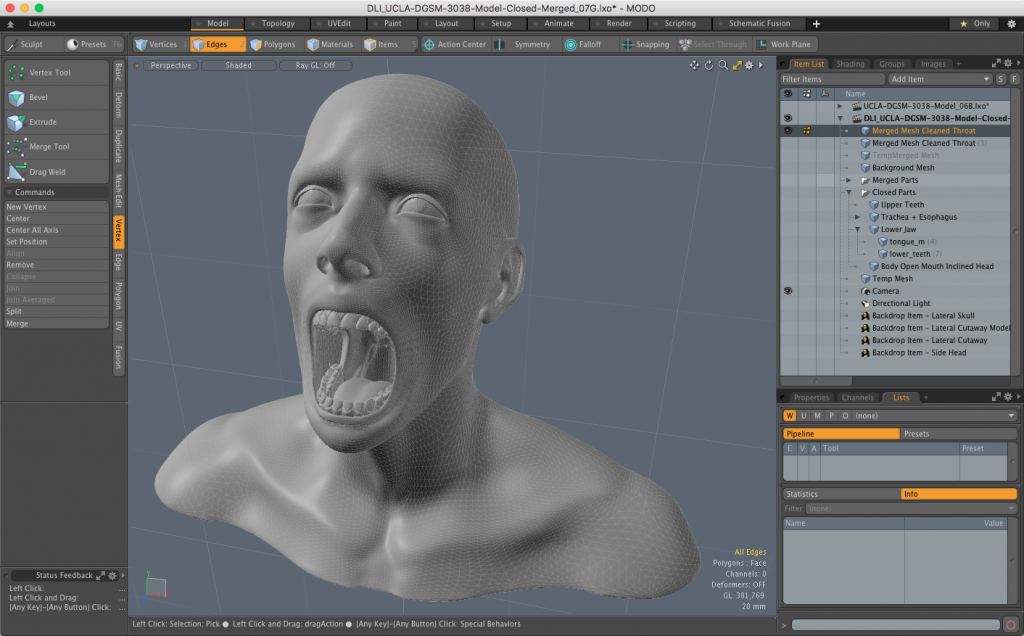 I exported the finished model as an STL file for the client to import into their 3D printing software where they filled the large solid areas with a honeycomb and took care of the need for any exit holes, minimum tolerance tweaks for their printer, etc.

Here’s some additional information about preparing models for 3D printing:

Final Result of this How to Model for 3D Printing Tutorial

I then sent the finished 3D model STL export to the client for them to import into their 3D printing software for final printing prep. I also brought the final model into LightWave 3D where I created a simple 3D medical animation sample for our online portfolio.