Joe Mangosteen needed 3D Character Design & Illustration for a more sophisticated 3D character to upgrade their existing brand from an older 2D character logo they had been using. DreamLight created two different alternative 3D character designs from which to choose. We created a simple cute version and a more complex sophisticated version, both based on a personification of the same mangosteen fruit. In both versions the split in the mangosteen’s rind forms the mouth of the character with the rind serving as the lips and the inside pulp serving as teeth. The more complex version has more custom formed lips. In the simple version the eyes are simple round balls protruding from the rind. In the more complex version the eyes are inset into the rind where the 3D mesh was split and modeled into eyelids. The more sculpted forms of the complex version could be manipulated to allow a greater range of expression than the simpler version, which is perpetually cute and happy. The client chose the simpler cute version which was the closest to their original 2D character logo in order to upgrade their brand without straying too far from their previous branding efforts. This new 3D character illustration was then used to update their brand across their entire product line.

Whether you need 3D Character Design & Illustration for web or print, or 3D CGI Character Animation for use on the web, video, or TV broadcast, you can rely on DreamLight’s vast experience. We’ve been bringing digital dreams to light with 3D CGI computer graphics for over a quarter century and we’d love to help bring your dreams to light. We even wrote the book: Creating a 3D Animated CGI Short, available on Amazon.com. 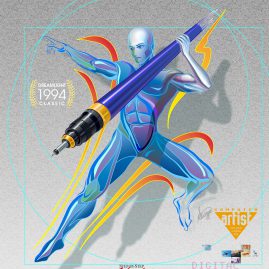