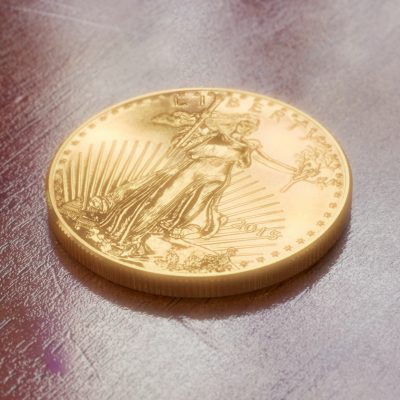 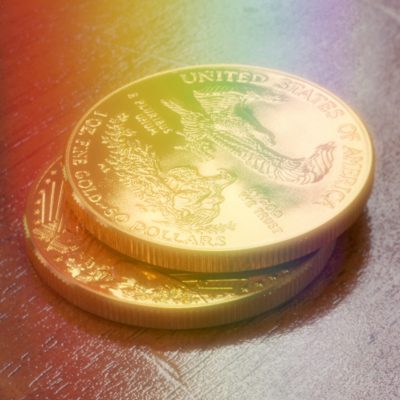 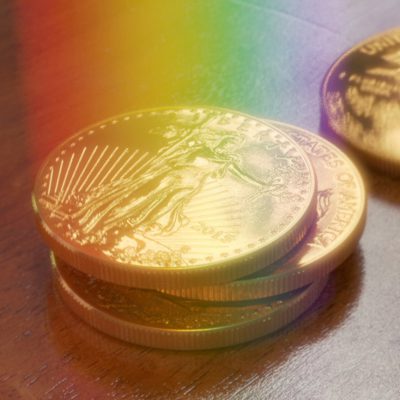 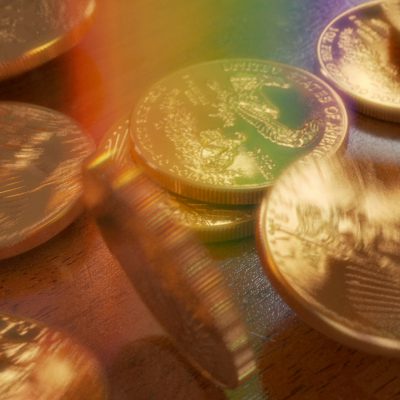 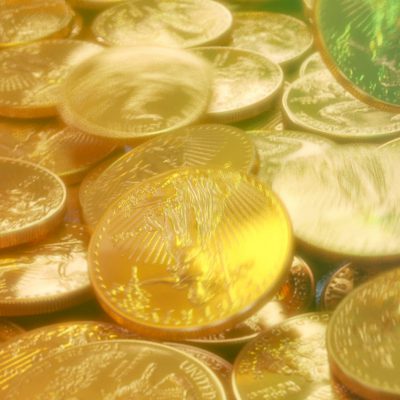 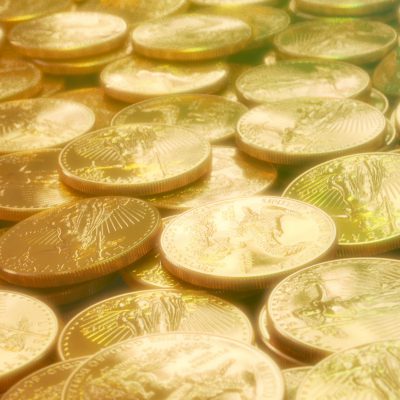 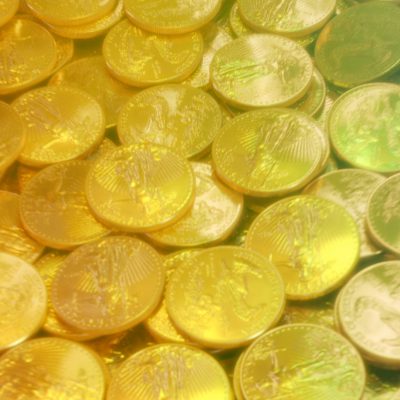 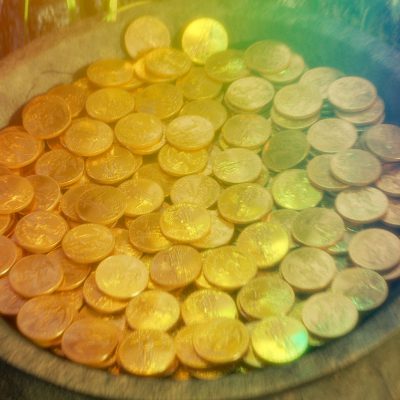 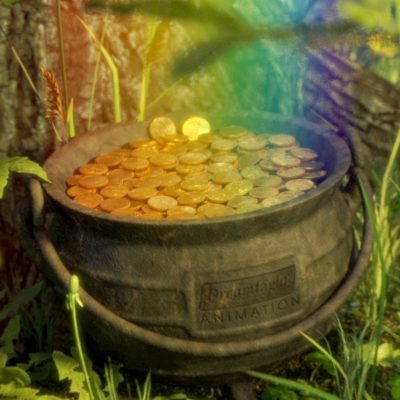 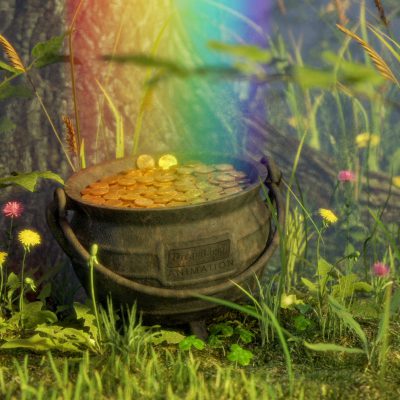 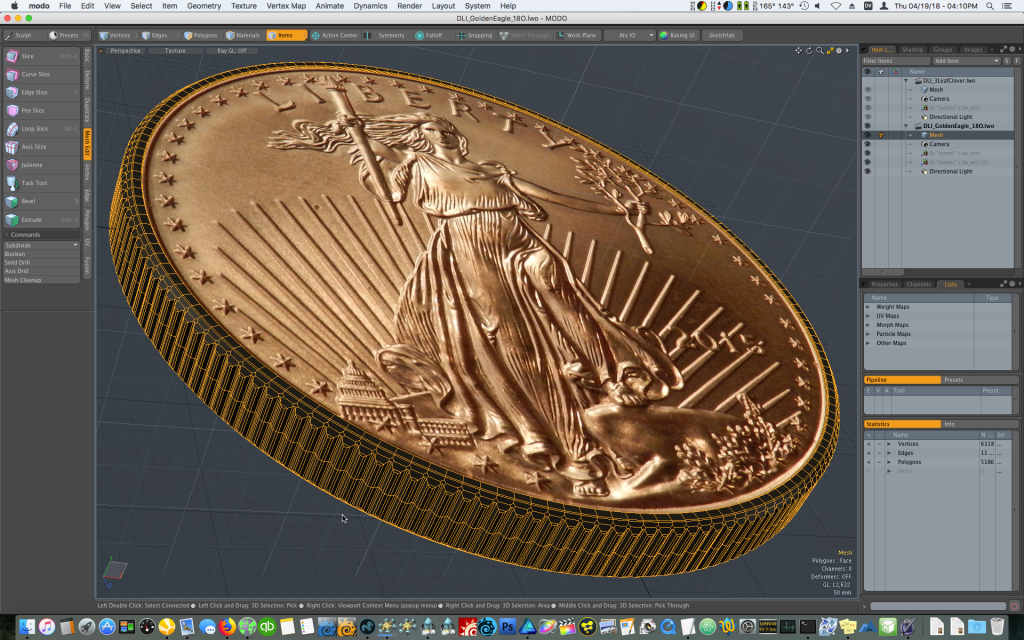 We began by created a detailed 3D model of a coin in Modo 902 including custom modeled ridges for the edge reeds. This way even when viewed up close the models would look realistic no matter what edge was seen in profile. The front and back faces could never be seen in profile because they are recessed below the outer edge lip (which was modeled). Therefore a texture map would be sufficient to create the recessed front and back faces. 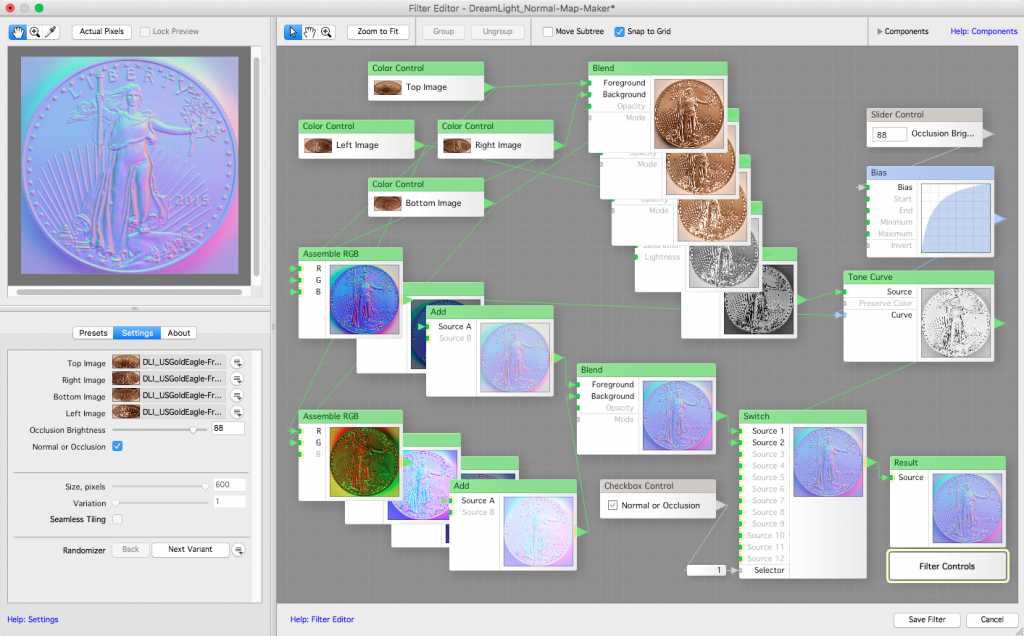 Read our behind the scenes blog post: How to Create Normal Maps from Photographs. See how we created a custom Filter Forge filter to convert photographs into detailed 3D normal maps that we used to create the surface textures for the front and back faces.

You can get real Gold Coins similar to those I borrowed to create this project on Amazon.com 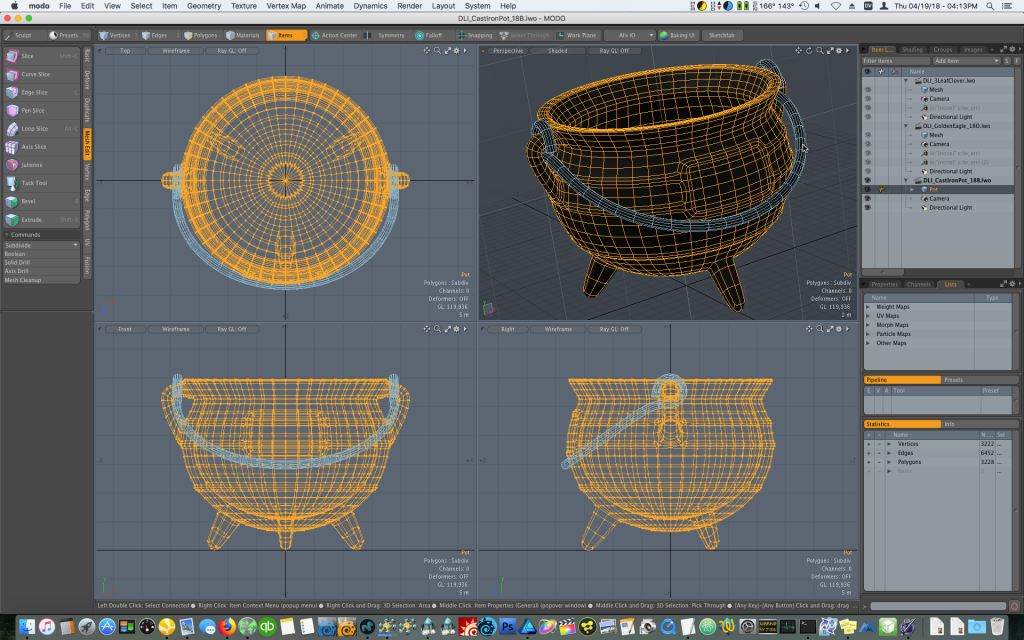 We modeled an iron pot to hold the gold in the outside scene. Most of the plant models are from XFrog’s free plant samples and VizPeople’s free grass samples. We refined some of the models and surface textures for what I needed and created a few additional plant models in Modo such as the clovers. 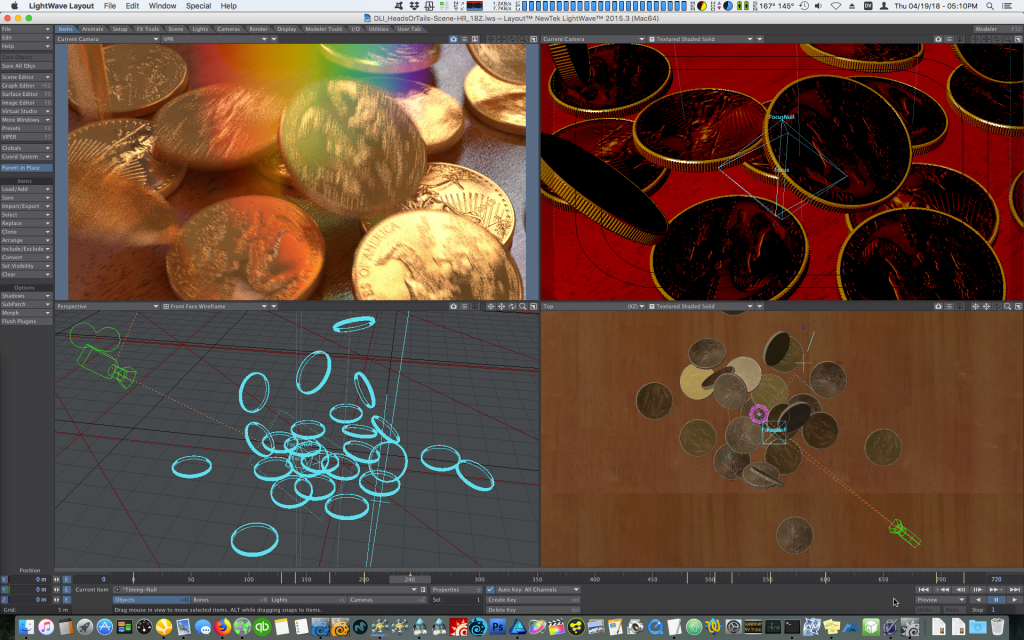 Read our behind the scenes blog post: How to Animate Falling Coins with Bullet Dynamics. This tutorial shows how we used Bullet Dynamics and Motion Designer to animate the falling coins in LightWave 3D 2015. 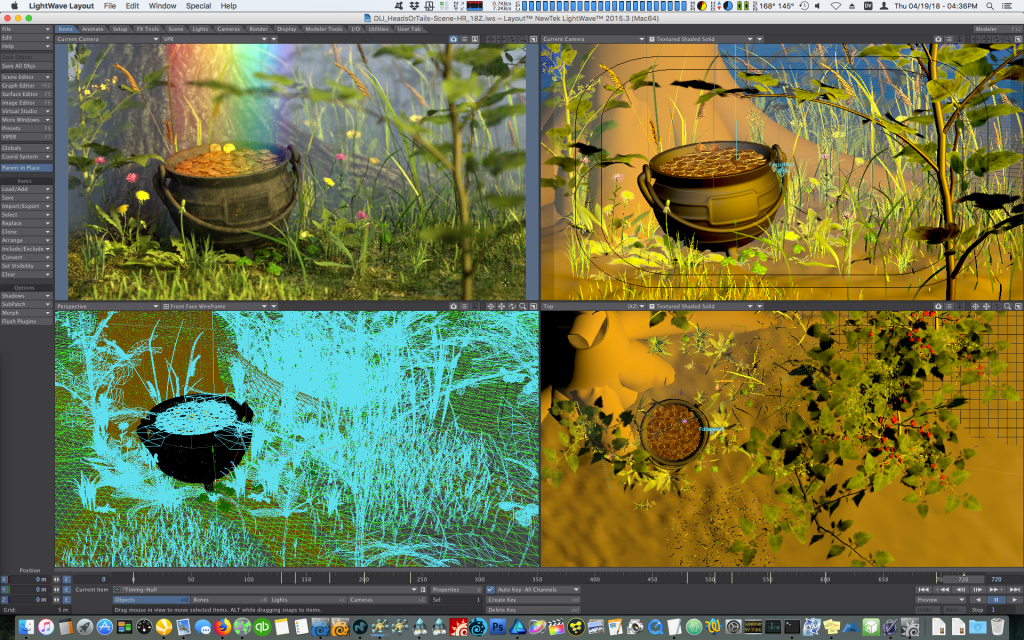 Read our behind the scenes blog post: How to Animate Waving Plants with Displacements & Gradients. See how we used procedural animated mesh displacements to simulate the subtle breeze rustling the plants. Here is a LightWave 3D forum WIP thread with some posts from the production while the work was still in progress. And see what the real coin experts think about the animation on the Collector’s Universe coin forum. 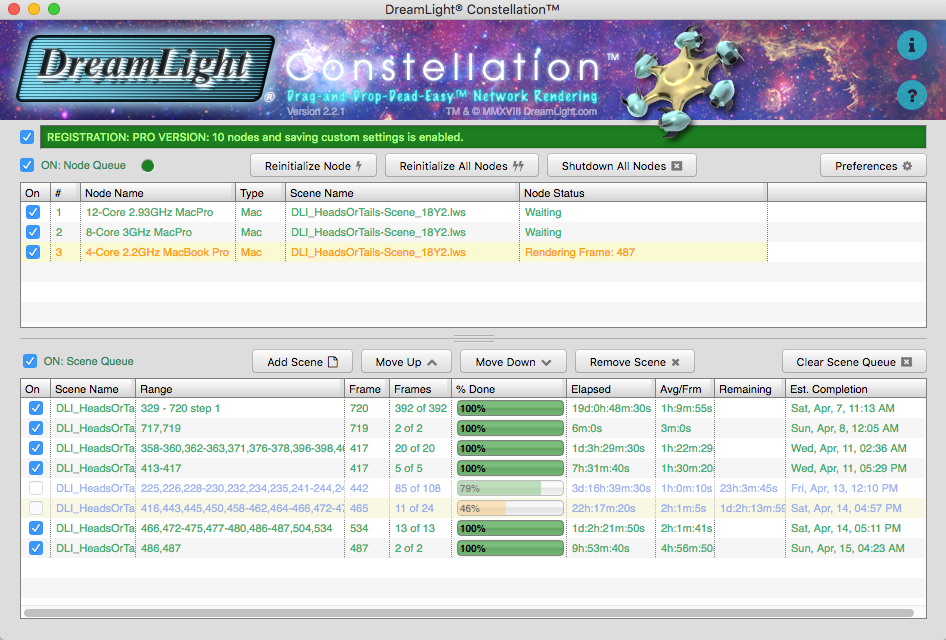 We performed all network rendering for the project using our own DreamLight Constellation Network Render Controller across various Macs in the studio. One issue We encountered was that Mac OS X would periodically drop the connection to the shared network volume. In order to circumvent this problem We wrote a simple JavaScript applet, DLI_ReMounter to monitor and re-mount the shared network volume.

Due to the radiostiy bouncing around in hundreds of motion blurred coins some of the LWSN render nodes would periodically hang and drop frames. This became a hassle to constantly monitor and identify missing frames for re-rendering so We wrote another JavaScript droplet – DreamLight_SequenceChecker.

We plan to roll these remounting and sequence checking features into a future version of DreamLight Constellation and/or DLI_SNUB-Launcher. 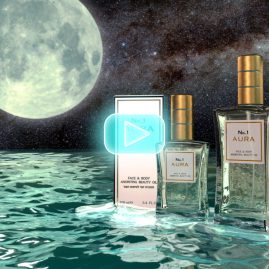