From Static HTML to CMS Based WordPress

Our previous award-winning web site served us well for many many years. The design was based upon our corporate stationary design that was printed in the juried book Letterheads 8, The international annual of letterhead design and Art Design magazine. 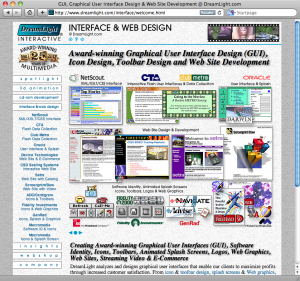 The previous web site was cutting edge at the time when it was originally designed in DreamWeaver using a custom built template. It was widely published over the years across a wide range of media including the following publications: Digital Portfolio – 26 Design Portfolios Unzipped, FreeHand Bible, Desktop Publisher’s Journal and SmartComputing’s Super Web Tips. It won runner-up in Apple’s Create the Best Web Site with Mac and it placed #12 in the Top 100 3D Web Sites. It even appeared on WCVB-TV-5 Boston’s The Cutting Edge. That DreamWeaver template based site was a big step forward from the very first DreamLight web site that I had hand coded in HTML way back when the World Wide Web first appeared.

I’ve been intending to replace that second generation, static HTML table based site, with a new web site based upon a more modern CMS (Content Management System) like WordPress for quite some time now. I just needed to find some time to devote to work on our own site between work on more pressing client projects. This new third generation web site will be another giant leap forward for DreamLight.

I started by creating a new bitmapped version of our DreamLight logo, pixel by pixel, for pixel-perfect display on today’s larger monitors and new-and-improved Retina displays. The DreamLight Logo is also available on DreamLight merchandise. I’m initially launching this new site with a few starter pages to begin the update process including a home/spotlight for our most recent client sample and news, a portfolio with a few additional samples, a new blog for news, a shop with a few initial items, an about page with a brief history of the studio, and a new and improved contact page. I’ll add new content as it becomes available and will update some of our previous content for the new site as time permits.

While this new WordPress site is being further developed we’ll be leaving the old static HTML site up and running at the following URL: www.DreamLight.com/welcome.html until all the necessary legacy content is migrated over to the new site.

This new site is based upon a clean and feature filled WordPress theme. It’s a responsive theme, meaning it reformats all content on the fly based upon the screen width, from a large widescreen display all the way down to an iPhone. I’ll be further modifying and extending this pre-built theme with our own custom-built child theme, specifically for our needs as well as adding additional samples and content as available. The base theme is named Virtue, by Kadence Themes.